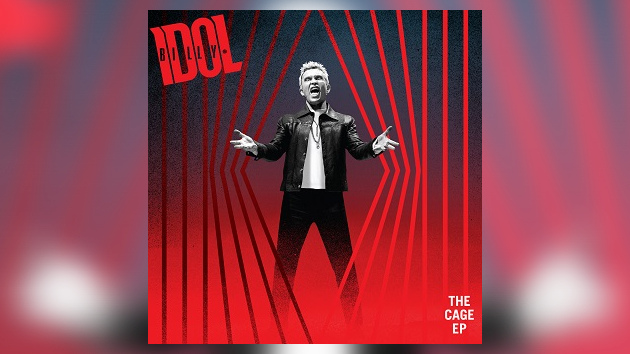 The EP is available on CD, digitally, and as a standard black-vinyl disc and a limited-edition red-vinyl disc.

The Cage features four new songs on which the veteran pop-punk rocker collaborated with his longtime guitarist, Steve Stevens.

Fans got their first taste of the record last month, when Idol released the track “Cage,” along with a companion music video.

The Cage‘s other songs are “Running from the Ghost,” which focuses on Billy overcoming drug addiction; “Rebel Like You,” a blues-rock tune that pays tribute to his 2-year-old granddaughter; and “Miss Nobody,” a spoken-word rap/R&B/funk-influenced track inspired by a feisty homeless woman he crossed paths with near the studio where he was working on the EP.

“These new songs are celebratory because Steve and I are enjoying ourselves,” Idol recently told Variety. “It’s kind of wild to still be making music we’re excited about.”

Meanwhile, Billy kicks off a new European tour Friday night in Halle, Germany. The trek is mapped out through an October 25 show in Leeds, England. When Idol returns to the U.S., he’ll launch a five-date Las Vegas residency at The Cosmopolitan that runs from November 11 through November 19.