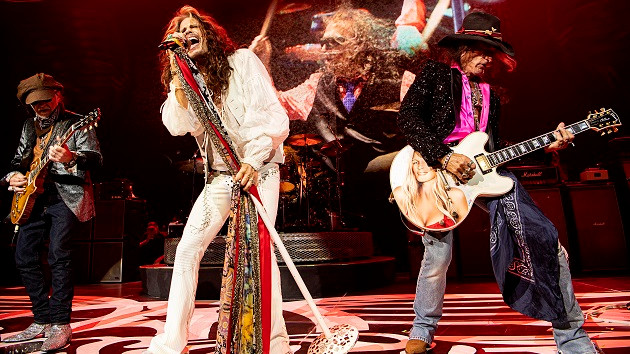 Aerosmith launched its 2022 Deuces Are Wild Las Vegas residency on Wednesday night at the Dolby Live theater at the Park MGM resort.

The concert is one of eight dates the Rock & Roll Hall of Famers are playing at the Sin City venue in September and early October; the band has another eight-show engagement scheduled there in late November and early December.

Aerosmith originally was supposed play its first 2022 Las Vegas stand in June and July, but those concerts were canceled in May when it was announced that frontman Steven Tyler had entered a treatment facility after relapsing while recovering from foot surgery.

According to People, Tyler was in fine form at Wednesday’s show. The magazine notes he seemingly eluded to his substance abuse issues when he commented to the audience, “It’s either too much or too little all the time. I’m a big fan of too much.”

According to Setlists.fm, the band played a hit-packed, 17-song set that included such classics as “Back in the Saddle,” “Love in an Elevator,” “I Don’t Want to Miss a Thing,” “Sweet Emotion,” “Dude (Looks Like a Lady),” “Dream On” and “Walk This Way.”

Leading up to the launch of the residency, the band played concert on September 4 in Bangor, Maine and September 8 at Boston’s Fenway Park. Their next Vegas concert takes place this Saturday, September 17.

Tickets are available at Ticketmaster.com/Aerosmith.