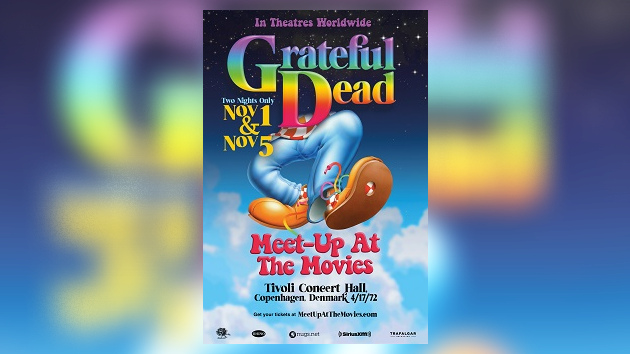 The Grateful Dead‘s “Meet-Up at the Movies” screening events are set to return this year for the first time since 2019.

The latest edition of the cinematic gathering, dubbed “Grateful Dead Meet-Up 2022,” will take place at select theaters around the world on November 1, with additional screenings to be held in the U.S., Canada and other locations on November 5.

This year’s event will feature film of an April 17, 1972 show at the Tivoli Concert Hall in Copenhagen, Denmark — a performance that was part of the band’s legendary Europe ’72 tour.

Tickets for the screenings go on sale on Friday, September 23 at 10 a.m. ET at MeetUpattheMovies.com.

The 90-minute performance was The Grateful Dead’s first concert ever to be broadcast live and was shown on Danish television. The footage has been restored and color corrected in high-def, and the audio has been mixed and mastered from the original master tapes.

The “Grateful Dead Meet-Up 2022” event will bring to an end a year-long celebration of the 50th anniversary of the band’s Europe ’72 live album. The commemoration also included the release of remastered versions of the original album as well as a 24-LP box set, exclusively available at Dead.net, that documents four full concerts from the trek.