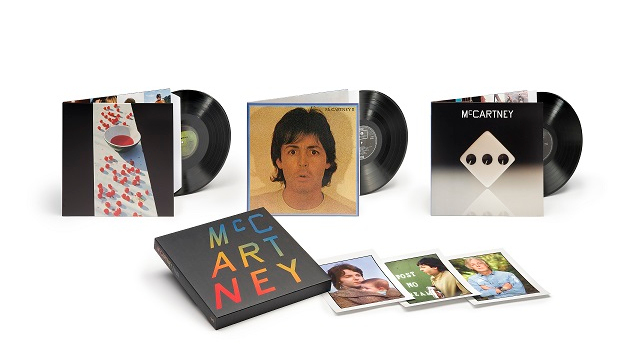 The McCartney I II III collection is available in three formats -– a three-CD set, a three-LP black-vinyl package and a limited-edition three-LP colored-vinyl set.

All three versions feature three photo prints with notes from the former Beatles star about each record.

Coinciding with the release of the box set, McCartney, McCartney II and McCartney III have become the first solo albums by Sir Paul to be mixed in the high-res Dolby Atmos format. You can listen to the Dolby Atmos mixes via various streaming outlets.

The common thread between all three albums is that Paul wrote, produced and recorded them almost entirely by himself.

Released in April 1970, McCartney was Paul’s debut solo album and signaled the breakup of The Beatles. The record spent three weeks at #1 on the Billboard 200 chart, although no singles were released from it. The album included the enduring song “Maybe I’m Amazed,” as well as such gems as “Every Night,” “Junk” and “Teddy Boy,” three tunes that McCartney previously had worked on with The Beatles.

McCartney II was released in May 1980 and found the veteran rocker experimenting with synthesizers and modern recording techniques. The album reached #3 on Billboard 200 and included the chart-topping hit “Coming Up” and the tune “Waterfalls,” which was a top-10 single in the U.K.

McCartney III was recorded during the COVID-19 lockdown and was released at the end of December 2020. It debuted at #2 on the Billboard 200.