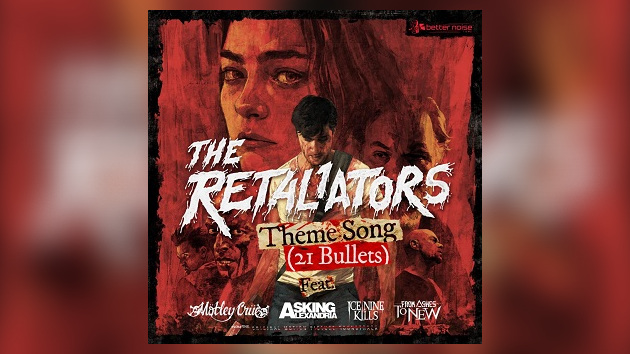 Mötley Crüe has teamed up with fellow hard rockers Asking Alexandria, Ice Nine Kills and From Ashes to New on a new song for the soundtrack to the upcoming thriller film The Retaliators.

The track, titled “The Retaliators Theme Song (21 Bullets),” was co-written by Mötley’s Nikki Sixx and his Sixx:A.M. bandmate James Michael. It marks the first new music from the “Dr. Feelgood” rockers to follow the 2019 soundtrack to The Dirt, which featured four new Crüe recordings, including the Machine Gun Kelly collaboration “The Dirt (Est. 1981).”

“Writing a new theme song for a horror flick was inspiring,” Sixx says. “This was my first time writing for a horror-thriller film, and it took me in a different direction from the first theme song I wrote — ‘The Dirt (1981)’ by Mötley Crüe.”

The bassist adds, “I worked with some great new artists to create a new sound that will stretch Mötley Crüe’s audience to new fans. I had a great time writing it, and I think our fans will love it, too!”

You can listen to “21 Bullets” now via digital outlets and watch its accompanying video streaming now on YouTube.

The Retaliators will be released September 14, and its soundtrack, which also songs featuring Mötley Crüe members Tommy Lee, Vince Neil and Mick Mars, as well as contributions from Papa Roach, Five Finger Death Punch, The Hu and others, drops September 16.

Lee, Papa Roach’s Jacoby Shaddix and members of Five Finger Death Punch have roles in the film, as well.

Meanwhile, you can catch Mötley Crüe on their ongoing Stadium Tour with Def Leppard, Poison and Joan Jett & the Blackhearts, which continues Friday in Boston.