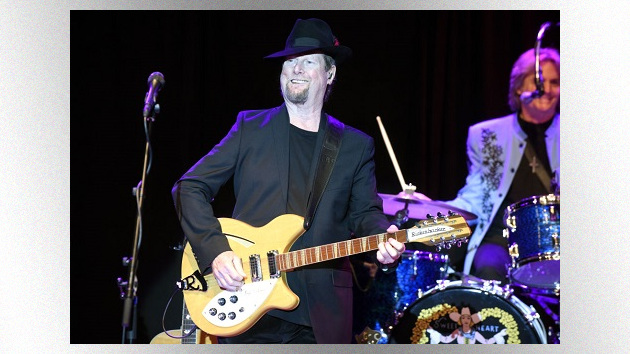 The singer, guitarist and songwriter, who was born James McGuinn, started his career working with such folk artists as The Limeliters, The Chad Mitchell Trio and Judy Collins.

In 1963, McGuinn relocated to Los Angeles, and after seeing The Beatles‘ George Harrison playing a 12-string Rickenbacker guitar in the 1964 movie A Hard Days Night, he took up the same instrument. McGuinn co-founded The Byrds that year with singer Gene Clark, singer/guitarist David Crosby, bassist Chris Hillman and drummer Michael Clarke.

Considered one of the originators of folk rock, the group showcased the harmonies of McGuinn, Clark and Crosby, while combining folk influences with Beatles-inspired rock.

Applying his folk techniques to the electric 12-string, McGuinn developed what became The Byrds’ signature jangly sound, which has influenced countless artists over the years.

The Byrds’ debut single, a cover of Bob Dylan‘s “Mr. Tambourine Man,” topped the Billboard Hot 100 in June 1965. The band reached #1 again in December ’65 with their version of Pete Seeger‘s “Turn! Turn! Turn!“

McGuinn also wrote or co-wrote a few Byrds hits, including the influential psychedelic tune “Eight Miles High,” the country-flavored “Mr. Spaceman” and the horn-driven “So You Want to Be a Rock ‘n’ Roll Star.”

The Byrds also pioneered country rock with the 1968 album Sweetheart of the Rodeo. From 1968 to ’73, McGuinn was the only founding member who remained in the group. The original lineup reunited for a final album, 1973’s The Byrds, before breaking up.

In the late 1970s and early ’80s, McGuinn teamed up with two former Byrds band mates in the group McGuinn, Clark and Hillman, which scored a top-40 hit with 1979’s “Don’t You Write Her Off.”

Since the ’80s, Roger has mainly focused on his solo career, although he teamed with Hillman and Crosby in 1990 to record four songs for a Byrds box set.

McGuinn was inducted into the Rock & Roll Hall of Fame with The Byrds in 1991.