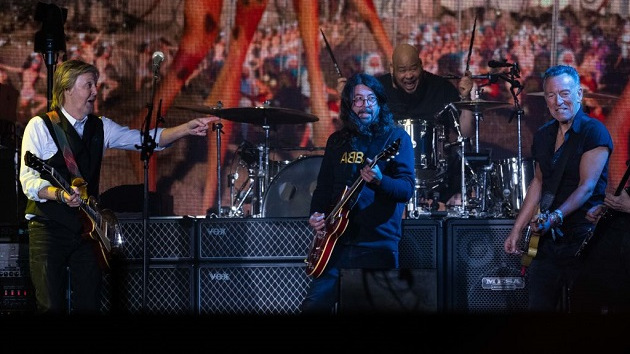 Sir Paul, who turned 80 on Saturday June 18, also thrilled the crowd by welcoming two surprise guests to the stage during his show — Foo Fighters frontman Dave Grohl and the Boss himself, Bruce Springsteen.

Regarding Grohl, it was his first time returning to the stage since the death of Foo Fighters drummer Taylor Hawkins in March.

As reported by NME, McCartney introduced Grohl as “your hero from the West Coast,” and he and Dave then proceed to play the early Beatles classic “I Saw Her Standing There,” followed by the 1973 Wings hit “Band on the Run.”

Paul also explained to the audience that Grohl “flew in especially to do this,” noting that he had to overcome flight cancellations in Los Angeles to be able to play the show.

After Grohl exited the stage, McCartney introduced his second surprise guest, welcoming, “from the East Coast of America,” Springsteen.

Bruce, who also had joined Paul at the final show of McCartney’s Got Back Tour of the U.S. on June 16 at MetLife Stadium in East Rutherford, New Jersey, played the same two songs that he did at the previous gig — his own hit “Glory Days,” and the early Beatles rave-up “I Wanna Be Your Man.”

Grohl and Springsteen also came back out on stage for the finale of McCartney’s Glastonbury show, jamming out with Paul and his band on a rendition of The Beatles’ “The End.”

McCartney’s concert lasted about two-and-a-half hours and featured over 30 songs. You can check out some fan-shot highlights of the show at NME.com, while PaulMcCartney.com also has posted a recap of the event.