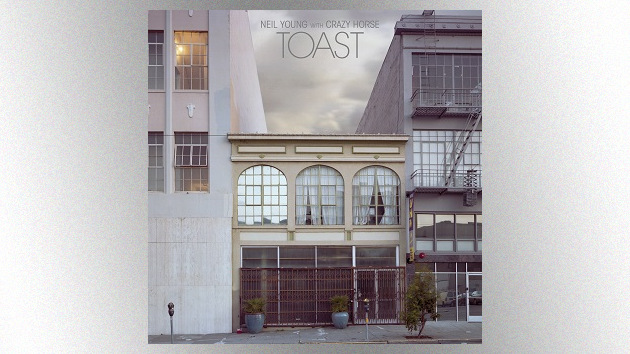 Toast, an album that Neil Young recorded with Crazy Horse in 2001 but then shelved, finally will be released on July 8.

The seven-track collection, which was recorded at Toast Studios in San Francisco, includes three songs that have never been released before. The album can be pre-ordered now and will be available on CD, as a two-LP vinyl set and via digital formats.

Those who purchase Toast on CD and vinyl at Young’s Greedy Hand Store will receive a high-res digital download from Neil’s Xstream Store at his Neil Young Archives website.

One of the tracks, “Standing in the Light of Love,” has been issued as an advance digital single.

Young shared some details about Toast in a message published in on Neil Young Archives in 2021 and reposted today.

“Toast is an album that stands on its own in my collection, unlike any other,” Young wrote. “The songs of Toast were so sad at the time that I couldn’t put it out. I just skipped it and went on to do another album in its place.”

He continued, “The music of Toast is about a relationship. There is a time in many relationships that go bad, a time long before the breakup, where it dawns on one of the people, maybe both, that it’s over. This was that time.”

Neil also praised Crazy Horse’s performance on the tracks, writing that the band “shows a depth never seen or heard before on any other Horse recording.” He added, “For the greatest group I have ever met — Crazy Horse — this is a pinnacle. Where they let me go, where they took me, was unbelievable. I couldn’t stay.”