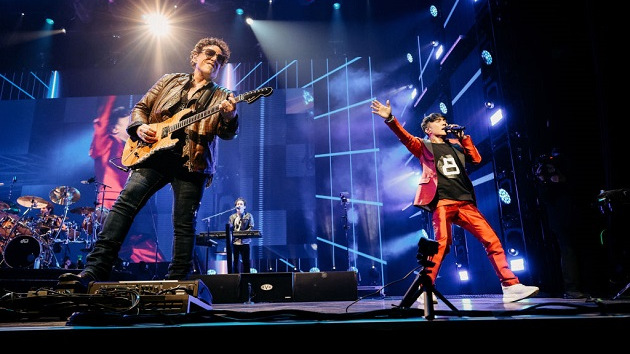 Here’s some disappointing news for Journey fans planning to see one of the last few shows of the band’s current North American tour — the final four concerts have been postponed because an unspecified member of the group has tested positive for COVID-19.

The affected dates were scheduled to take place last night in Washington, D.C.; tonight in Hartford, Connecticut; this Friday, May 13, in Toronto; and this Monday, May 16, in Quecbec City, Canada.

In a message posted on their social media pages, Journey says, “The shows will be rescheduled for a later date, more information will be provided on the band websites shortly. Please hold on to your tickets at this time.”

The concerts in Washington, D.C.; and Hartford were to have featured Toto as the opening act, while Heart‘s Ann Wilson was to have opened the two Canadian gigs.

Journey’s Freedom Tour 2022 kicked off on February 22 in Pittsburgh, with Toto as the featured support act throughout the U.S. leg.

As previously reported, Journey will release a new studio album titled Freedom on July 8. Two advance tracks from the album have been released so far — “The Way We Used to Be” and “You Got the Best of Me,” which debuted in June 2021 and last month, respectively. You can pre-order Freedom now.

Meanwhile, in a conversation thread on his official Facebook page, founding Journey guitarist Neal Schon revealed that a second leg of the Freedom tour is being organized and he hinted that Toto also will be involved as an opening act on the upcoming series of shows.