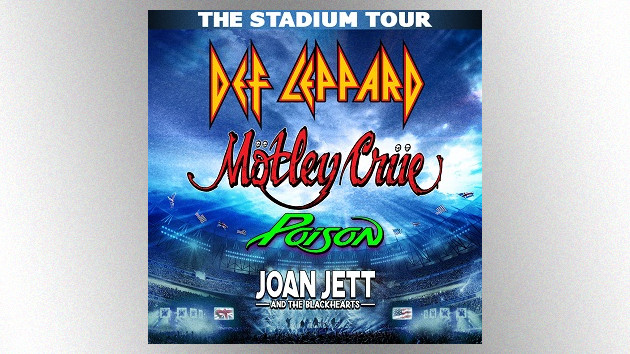 Many music fans planning to attend concerts this summer will be checking StubHub to see if they can score tickets to shows by their favorite acts. Now, the ticketing platform has revealed which artists boast the most in-demand shows scheduled between Memorial Day on May 30 and Labor Day on September 4.

Topping the list is the multi-act Stadium Tour co-headlined by Mötley Crüe and Def Leppard and also featuring Poison and Joan Jett & the Blackhearts.

The trek, which kicks off June 16 in Atlanta, includes 36 U.S. dates through Labor Day. Other rock tours in the top 10 of the tally include Elton John at #5, Paul McCartney at #7, Billy Joel at #8, and Red Hot Chili Peppers at #9.

Elton has just eight stateside shows scheduled between Memorial Day and Labor, McCartney and Joel have six, and the Chili Peppers have 14.

Of the top-10 acts on the list, McCartney boasts the highest average price of tickets sold to his concerts…$349.

StubHub also has listed the top-10 “trending” touring artists of the summer of ’22, a tally that’s based on the increase in average show sales since their 2019 shows. Topping the list is Doors guitarist Robby Krieger, who enjoyed an increase of 680%. Other artists on the tally include John Waite at #5 with a 410% jump, and The Wallflowers at #10 with a 310% increase.