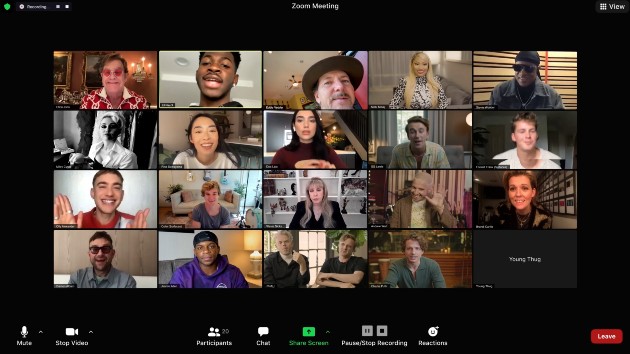 Stevie Nicks and Eddie Vedder join Elton John and a whole lot of other big-name artists on the “ultimate Zoom call.”

The star-studded video chat, which has been posted on Elton’s official YouTube channel, features the “Rocket Man legend talking remotely with many of the collaborators on his new album, The Lockdown Sessions, including the Fleetwood Mac singer and Pearl Jam frontman.

At one point during the video, Nicks, who contributed vocals to a song called “Stolen Car” on The Lockdown Sessions, tells Elton, “It was my pleasure to sing with you, and I hope I did a good job on your song, ’cause I really tried hard and I love it so much.”

Later on in the clip, Vedder brings out a Disneyland ticket in reference to his Lockdown Sessions song with John, “E-Ticket.” “Recording with you, my friend, was the greatest ride anybody could offer,” Eddie tells Elton.

Vedder also shares a drawing he owns of John as a superhero that was made by late Who bassist John Entwistle.

After the Zoom call ends, we see Elton sitting alone in his house when his pal, U.K. pop star Ed Sheeran, with whom he recently released the holiday single “Merry Christmas,” runs into the room wearing a Santa hat.

After joking around a bit, Ed then snuggles up to Elton and embraces him, and the two both wish fans a Merry Christmas.

The Lockdown Sessions was released in October. As its name suggests, the record includes a variety of collaborations John recorded while quarantining amid the COVID-19 pandemic.