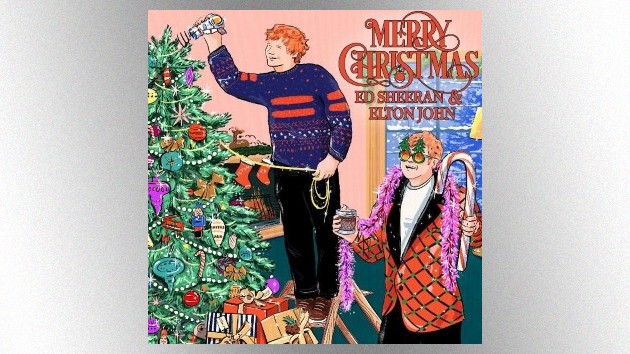 It was surprising enough that Elton John scored a number-one single this year, but now he’s racked up two.

However, Elton and Ed may soon find themselves competing with themselves to hold onto the top spot on the chart.  The reason why is pretty complicated, but here goes.

It’s a huge deal in the U.K. to have the song that’s number-one on Christmas Day. Each year, the competition for the “Christmas Number One” slot is intense.

For the past three years, a husband-and-wife duo billed as LadBaby have scored the Christmas number one with novelty songs about food — specifically, sausage rolls.  They donate the proceeds from the songs to the Trussell Trust, a charity that’s trying to end hunger in the U.K.

Now, Ed and Elton have teamed up with LadBaby to record a new song and video called “Sausage Rolls for Everyone” — a reworking of “Merry Christmas” with food-based lyrics. As before, 100% of the song’s profits will go to charity.

The song comes out next Friday, and the U.K. Christmas Number One will be announced December 24, so it just may come down to a battle between Ed and Elton’s original, and “Sausage Rolls for Everyone”

LadBaby said in a statement to the U.K.’s Official Charts Company, “Ed and Elton are pop royalty and they’ve both had huge success at Christmas, so we’re honored and excited to be coming together to help families this Christmas.”

“It’s time to bring back some Christmas magic with the power of sausage rolls!” Elton notes.