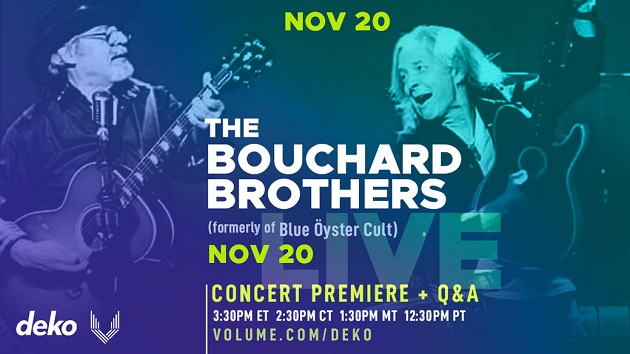 Former Blue Öyster Cult members Albert Bouchard and Joe Bouchard have teamed up for a special livestream event that’s scheduled to premiere this Saturday, November 20, at 3:30 p.m. ET at Volume.com.

The show will feature the musical brothers performing songs as well as taking part in a Q&A.

Albert tells ABC Audio that he and Joe will be playing selections from their respective solo careers and well as a few Blue Öyster Cult classics.

The virtual event is free for those who sign up for a Volume.com membership. Viewers are encouraged to “tip” the artists during the event.

Meanwhile, Albert recently released a sequel to his 2020 concept album Re Imaginos, titled Imaginos 2 — Bombs over Germany (minus zero and counting).

The new album continues the story based on the writings and poems of late Blue Öyster Cult manager, producer and songwriter Sandy Pearlman about an alien conspiracy that comes to fruition during the late 1800s and early 1900s through the actions of an evil character named Imaginos.

Re Imaginos itself is a reimagined version of the 1988 Blue Öyster Cult concept album, Imaginos.

Last week, Bouchard premiered a music video for one of the Imaginos 2 tracks, “OD’d on Life Itself,” which you can check out on the Deko Entertainment label’s YouTube channel. Blue Öyster Cult originally released their own version of the tune on their 1973 album Tyranny and Mutation.