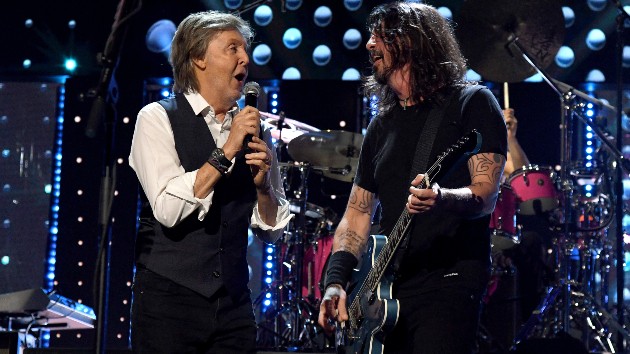 After skipping a full-on ceremony in 2020 due to the pandemic, the Rock & Roll Hall of Fame Induction Gala returned in full force to Cleveland on Saturday night, ushering in Foo Fighters, Carole King, The Go-Gos, Tina Turner, Todd Rundgren, JAY-Z and more.

Here are some of the evening’s many highlights:

—Paul McCartney inducted Foo Fighters, and compared Dave Grohl‘s post-Nirvana career to his own time in Wings, noting, “We had a great time with our groups, but eventually tragedy happened and my group broke up. Same happened with Dave. His group broke up under tragic circumstances. So the question is, what do you do now?”

The Foos performed “Everlong,” “Best of You” and “My Hero” before taking the podium. Grohl’s acceptance speech was short, he explained, “because the last 25 years has been me, just like, ‘‘Blah, blah, blah…rock ‘n’ roll…blah, blah, blah.'” He thanked his band and crew family, and his actual family, ending with “We did it!” In his speech, drummer Taylor Hawkins campaigned for the eventual induction of Soundgarden and George Michael.

The night concluded with McCartney and Foo Fighters jamming on “Get Back.”

—Drew Barrymore inducted The Go-Go’s, and recreated the cover of their album Beauty and the Beat by wrapping herself in a bath towel and applying face cream. “Beauty and the Beat blew the doors of my life off,” she told the crowd, adding, “They made me believe in things that weren’t possible.”

While the group accepting their honor, bass player Kathy Valentine said now that The Go-Go’s had been inducted, they’d be “advocating for the inclusion of more women,” adding, “Here is the thing: There would not be less of us if more of us were visible.” The band then rocked the crowd with “Vacation,” “Our Lips Are Sealed” and “We Got the Beat.”

—Angela Bassett, star of the Tina Turner biopic What’s Love Got to Do With It, inducted Turner for the second time — the singer had already been inducted in 1991 as one half of Ike & Tina Turner. As Bassett noted, “What brings us here tonight is Tina’s journey to independence. For Tina, hope triumphed over hate…ambition eclipsed adversity.”

Turner herself didn’t attend; she sent a pre-recorded thank-you. Instead, country star Mickey Guyton took the stage in Tina’s iconic ’80s uniform of denim jacket and black leather dress to sing “What’s Love Got to Do With It.” Then, country star Keith Urban and Oscar-winning R&B star H.E.R. sang “It’s Only Love.” Urban stepped in last-minute for Bryan Adams, Tina’s original duet partner on the song, who’d tested positive for COVID.

Christina Aguilera brought it all home with a stunning rendition of the Ike & Tina Turner classic “River Deep, Mountain High.”

—Todd Rundgren, who’s said for many years that if inducted, he wouldn’t attend, pointedly booked a concert the night of the ceremony. He was virtually inducted by Patti Smith, who has known Todd since their twenties. A tribute video included commentary from The Bangles‘ Susannah Hoffs and Daryl Hall.

—Taylor Swift opened the ceremony by performing King’s “Will You Love Me Tomorrow,” a number-one hit for The Shirelles before King herself recorded it for her iconic album Tapestry.  “I cannot remember a time when I didn’t know Carole King’s music,” Taylor told the crowd during her induction speech, adding that her parents raised her to believe King was “the greatest songwriter of all time.”

King, who’d already been inducted as a songwriter in 1990, acknowledged that even though she’s been told “that today’s female singers and songwriters stand on my shoulders,” we shouldn’t forget that “they also stand on the shoulders of the first woman to be inducted into the Rock & Roll Hall of Fame. May she rest in power, Miss Aretha Franklin!”

Jennifer Hudson then took the stage to perform “(You Make Me Feel Like) A Natural Woman,” followed by King herself leading the crowd in a singalong of “You’ve Got a Friend.”

The ceremony will air on HBO on November 20.