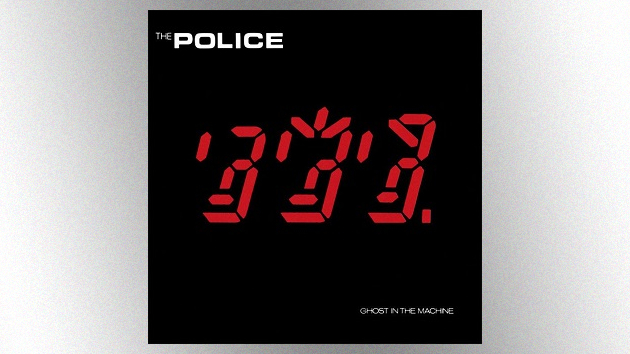 This Saturday, October 2, marks the 40th anniversary of the release of The Police‘s fourth studio album, Ghost in the Machine.

Released on frontman Sting‘s 30th birthday, the album became the new-wave band’s third consecutive chart-topping studio effort in the U.K. and continued the group’s ascending U.S. popularity, peaking at #2 on the Billboard 200.

Other memorable tunes on the album include “Demolition Man,” “Too Much Information,” “One World (Not Three)” and “Secret Journey.”

While Caribbean sounds, especially reggae, had always been part of The Police’s music, Ghost in the Machine was the band’s first album to mainly be recorded there — specifically at Beatles producer George Martin‘s AIR Studios on the island of Montserrat.

Reflecting on The Police’s success at the time and making the album on Montserrat, guitarist Andy Summers tells ABC Audio, “It was an amazing period, no question about it,” adding, “[T]his is the sort of rock star dream. You know, ‘Hey, we’re on an island in the Caribbean. We are the s*** now.'”

Summers says one his favorite songs on the album was “Spirits in the Material World.”

“I like to play that one ’cause it’s got a great rhythm,” he notes.

The Police soon returned to Montserrat to record their fifth and final album, the chart-topping Synchronicity. In 1989, however, AIR Studios closed after being damaged by a hurricane.

Ghost in the Machine, meanwhile, went on to sell over 3 million copies in the U.S.