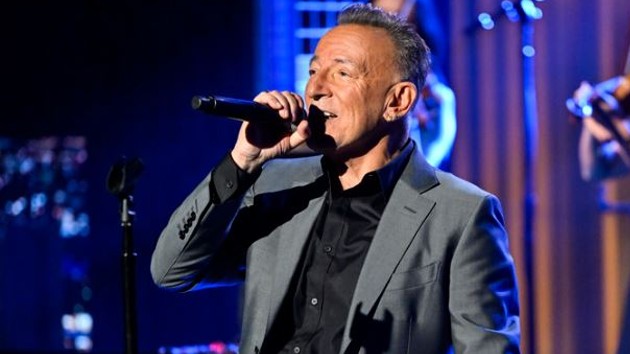 Bruce Springsteen took a moment during night one of his Tonight Show takeover on Monday to clear up some popular myths surrounding the legendary rocker.

As to whether he really sleeps with a guitar next to him, so that in case he dreams up a song he can immediately wake up and record it, Springsteen admitted, “I have done that.”

Noting that both he and Taylor Swift are mounting U.S. tours in 2023, and both are friends with frequent Swift collaborator Jack Antonoff, host Jimmy Fallon asked if either Bruce or Taylor would “pop into each other’s shows from time to time.”

“Well, I will be, because my daughter is gonna make sure. I will be at the Taylor Swift show,” Bruce confirmed, adding, “And she’s welcome on E Street anytime.”

Pulling out a copy of the album, Bruce explained that he was “insane about every little detail” regarding the album. “The lyrics for ‘Thunder Road,” are in this album — the correct lyrics. “Now I’ve been singing ‘Sways’ for almost 50 years,” he told the audience, before revealing the lyrics included with the album — “The screen door slams, Mary’s dress waves.”

“This is wrong,” he finally revealed, pointing to the album.

Springsteen, who’s promoting his new album Only the Strong Survive, will appear on the NBC show two more times this week, on Tuesday and Wednesday, and on November 24 during the show’s Thanksgiving episode.

The Boss also performed “Do I Love You” from the album.