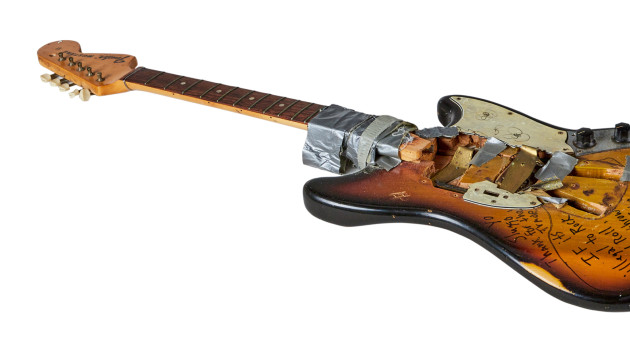 A 1973 Fender Mustang that the late Kurt Cobain played, smashed and autographed was the big winner at Julien’s Auctions’ “Icons and Idols: Rock ‘N’ Roll” auction over the weekend. Estimated at $200,000, it sold for $486,400.

The guitar, used at gigs in Chicago and Wilkinsburg, PA, on Nirvana‘s first U.S. tour in 1989, was smashed during the performance of “Blew” at the Pennsylvania gig. After the gig, the band stayed at the apartment of Hullabaloo‘s Sluggo Cawley, and Cobain offered to trade the Mustang for Cawley’s smashed Gibson SG. Cawley agreed and asked Cobain to sign the Mustang, which he did, writing, “Yo Sluggo/Thank for the trade/If its illegal to Rock and Roll, then throw my a** in jail/Nirvana.”

Other highlights of the auction included a gold and diamond watch that Elvis Presley owned, which went for $256,000; a piano on which Bob Dylan composed songs for his 1969 album, Nashville Skyline, which sold for $217,600; a bass The Who‘s John Entwistle played in the 1975 movie Tommy, which sold for $81,250; and stage-played guitars from Slash and Paul McCartney, which went for $31,250 and $76,800, respectively. Those guitars, painted the colors of the Ukrainian flag, were part of the Gibson Gives initiative, with all proceeds going to provide relief for Ukraine.

Finally, the Taylor Hawkins Tribute Concert Collection brought in thousands for MusicCares and its British equivalent, Music Support. Among the highlights: A 2022 Ram Rebel Crew Cab pickup truck, signed by everyone who participated in the Hawkins tribute concerts, sold for $64,000, while a black bass played by John Paul Jones and signed by him, Krist Novoselic, Dave Grohl, Elliot Easton and others, brought close to $22,000.