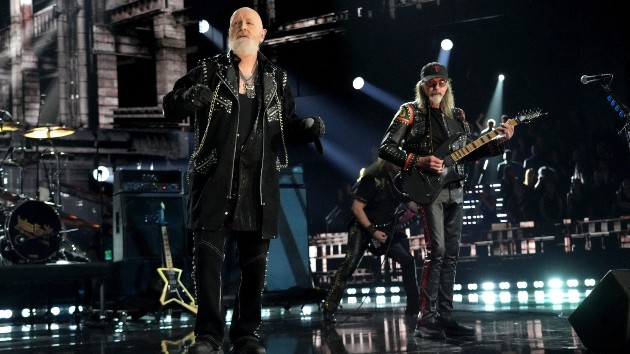 Judas Priest was inducted with the Musical Excellence Award, adding some much-needed heavy to the metal-light Rock Hall. Alice Cooper did the inducting honors, declaring Rob Halford and company to be “truly the definitive metal band.” Halford, who came out as gay in 1998, introduced himself as “the gay guy in the band.”

“We call ourselves the heavy metal community, which is all-inclusive,” Halford said. “It doesn’t matter what your sexual identity is, what you look like, the color of your skin, the faith that you believe in or don’t believe in, everybody’s welcome.”

Priest also reunited with former band mates K.K. Downing and Les Binks for performances of songs including “Breaking the Law” and “Living After Midnight.” They were also joined by guitarist Glenn Tipton, who retired from touring full time in 2018 due to Parkinson’s disease.

Pat Benatar was inducted by Sheryl Crow alongside husband and longtime musical partner Neil Giraldo. They performed songs including “Love Is a Battlefield” and “Heartbreaker.”

Referencing her long journey to the Rock Hall, and the many years she wasn’t nominated, Benatar joked, “First, I just wanna say that all is forgiven.”

Duran Duran was inducted by actor Robert Downey Jr. The celebration of their induction was subdued a bit by the news that Andy Taylor had been diagnosed with prostate cancer four years ago, and recently “suffered a setback” in his treatment, and was unable to attend the ceremony.

U2‘s The Edge inducted Eurythmics, who reunited for a rare performance, including a rendition of “Sweet Dreams (Are Made of This).” Lenny Kravitz introduced Lionel Richie, who was joined by Foo Fighters frontman Dave Grohl for a performance of “Easy,” while Aerosmith‘s Steven Tyler rocked with Eminem for the rapper’s song “Sing for the Moment.”

Carly Simon was unable to attend, but was inducted by pop singer Sara Bareilles. Olivia Rodrigo performed “You’re So Vain” in Simon’s honor.

Dolly Parton was the final artist to be inducted, and commented on her upcoming rock album that she decided to record after she was initially nominated. She was joined by several other inductees, including Rob Halford, for a performance of “Jolene.”

The night closed with Bruce Springsteen and John Mellencamp performing a tribute to the late Jerry Lee Lewis.

The 2022 Rock & Roll Hall of Fame Induction Ceremony will air November 19 on HBO.