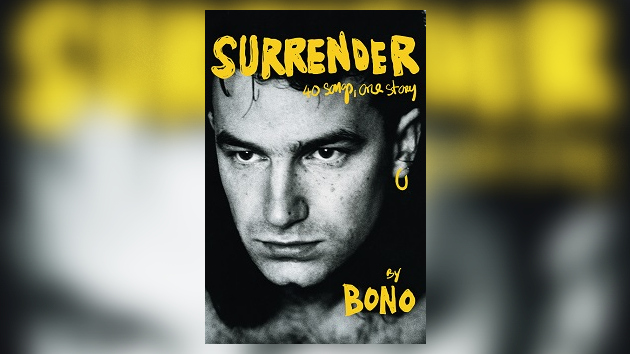 Bono‘s memoir, Surrender: 40 Songs, One Story, gets released on Tuesday, November 1, and to celebrate its arrival, the U2 frontman will make an appearance on ABC’s Good Morning America, which airs starting at 7 a.m. ET.

As previously reported, Surrender follows Irish rocker, born Paul Hewson, from his childhood in Dublin to the loss of his mother when he was 14, to the founding of U2 and their rise to global stardom. It also covers Bono’s activism, including his work to fight AIDS and extreme poverty.

The book’s subtitle refers to the fact that as each of its 40 chapters is named after a U2 song. Bono also contributed 40 original drawing to the publication.

To promote Surrender, Bono has lined up a 14-date book tour dubbed Stories of Surrender beginning Wednesday, November 2, in New York City. The trek, which is completely sold out, features stops in seven North American cities followed by stops in seven European cities. It runs through a November 28 event in Madrid.

The tour is described as “an evening of words, music and some mischief,” which means Bono won’t only be talking about his life, he’ll be singing about it too.

In other news, Bono also marked the impending arrival of his book with a humorous animated video posted Monday on U2’s YouTube channel and set during this year’s edition of the Halloween Parade in New York City’s Soho section.

The clip, which Bono narrates, features the singer excitedly watching as copies of Surrender are put on display in the window of a local bookstore. As the cartoon progresses, Bono is approached by people dressed as Elvis Presley, Bruce Springsteen and Lady Gaga, who are revealed to be his three bandmates — Larry Mullen Jr., The Edge and Adam Clayton.