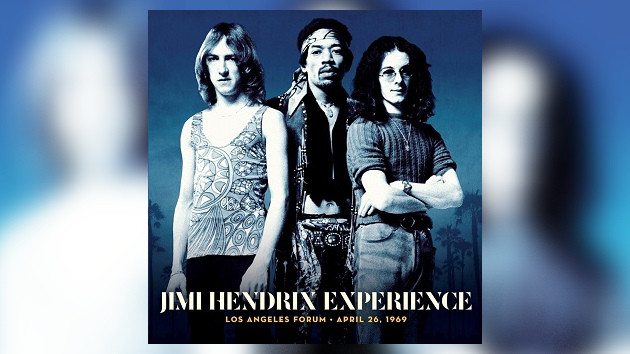 In addition, a companion video, featuring a montage of photos of Hendrix and his band taken at the concert, has premiered on Hendrix’s official YouTube channel.

As previously reported, the album, which can be preordered now, will be released November 18 and will be available on CD, as a two-LP vinyl and via digital formats.

The concert, which has never been released in its entirety before, features the group’s original lineup of Hendrix, bassist Noel Redding and drummer Mitch Mitchell performing a set that includes classics like “Foxey Lady,” as well as deeper cuts such as “Red House,” “Spanish Castle Magic” and “I Don’t Live Today.”

The show also features Hendrix doing his take on the “Star Spangled Banner” — several months before his historic performance of the national anthem at Woodstock — and an epic 17-minute medley combining “Voodoo Child (Slight Return)” with Cream‘s “Sunshine of Your Love.”

One of the main support acts at the Forum concert was Chicago Transit Authority, which would soon shorten its name to Chicago. A new video featuring founding Chicago members Robert Lamm, James Pankow and Lee Loughnane sharing recollections about getting to tour with and open for the Jimi Hendrix Experience has debuted on Hendrix’s YouTube channel.

In the clip, Pankow says of Hendrix and his band’s live performances, “Nobody had the ferocity and the daring that Jimi and his trio had … I’m not so sure that the audience necessarily understood the musicality, but they felt the power. It was overwhelming. It was undeniable.”