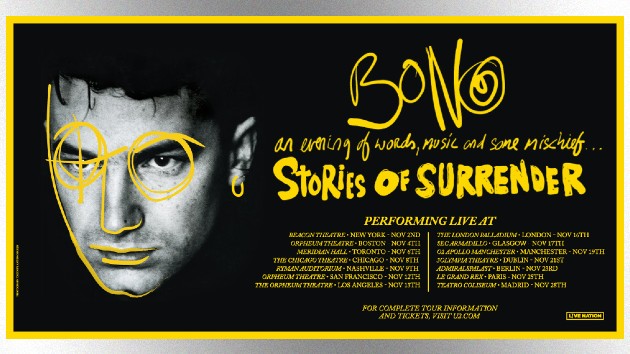 U2‘s Bono will support his forthcoming memoir with a 14-city world tour that kicks off November in New York City.

Bono’s memoir Surrender: 40 Songs, One Story will be released November 1. The first date of the tour is November 2 at New York’s Beacon Theatre. He’ll then visit Boston, Toronto, Chicago, Nashville, San Francisco and Los Angeles before heading overseas for appearances in the U.K., Ireland, Germany and France, and wrapping things up in Madrid, Spain on November 28.

The tour is described as “an evening of words, music and some mischief,” which means Bono won’t only be talking about his life, he’ll be singing about it too. In a statement, he says, “I miss being on stage and the closeness of U2’s audience. In these shows, I’ve got some stories to sing, and some songs to tell.”

He adds, “Plus, I want to have some fun presenting my ME-moir, Surrender, which is really more of a WE-moir, if I think of all the people who helped me get from there to here.”

Tickets for the book tour go on sale this Friday, October 7 at 10 a.m. local time via Ticketmaster, and each ticket comes with a copy of Bono’s book. There’s a two-ticket limit per person.

Surrender: 40 Songs, One Story has 40 chapters, each named after a U2 song. They tell Bono’s story from his days as a child growing up in Dublin, to the loss of his mother when he was 14, to the founding of U2 and their rise to global stardom. It also covers Bono’s activism, working to fight AIDS and extreme poverty. The singer’s also created 40 original drawings for the book.