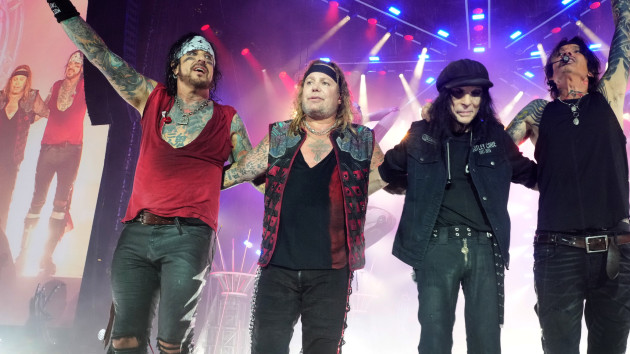 Mötley Crüe doesn’t plan to be staying “Home Sweet Home” for too long over the next couple years.

The Los Angeles metallers, who launched their reunion tour this summer after playing their supposed “final” show in 2015, are setting their sights on returning to U.S. stages in 2024.

“We’re far from being over,” vocalist Vince Neil tells the Las Vegas Review-Journal. “When we come back in ’24, we’re going to do it all over again.”

Those 2024 dates may also include another Las Vegas residency following Mötley’s previous Sin City engagements in 2012 and 2013.

“We have definitely talked about doing it, and everybody loves to do the residencies, so I say, ‘Yeah, we’re gonna do it,'” Neil says. “We just have to look at sometime in ’24, to be back in Vegas. But we will be back.”

Mötley’s reunion tour, which also featured Def Leppard, Poison and Joan Jett and the Blackhearts, launched in June after a two-year pandemic delay and concluded last Friday in Vegas.

In addition to the potential return stateside in 2024, Mötley plans to take the reunion international in 2023 with dates in Mexico, South American and Europe.

Meanwhile, Tommy Lee will be busy with a different kind of venture. The drummer has announced that he’s launching an OnlyFans account where he can have “fun that Instagram won’t let us have here.”

The news follows the controversial, nude selfie Lee posted on Instagram over the summer, which was eventually removed from the social media platform for violating its content guidelines. Lee addressed the post multiple times onstage, and during one Mötley show, pulled a dachshund out of his pants after asking the crowd if they wanted to see his “wiener.”