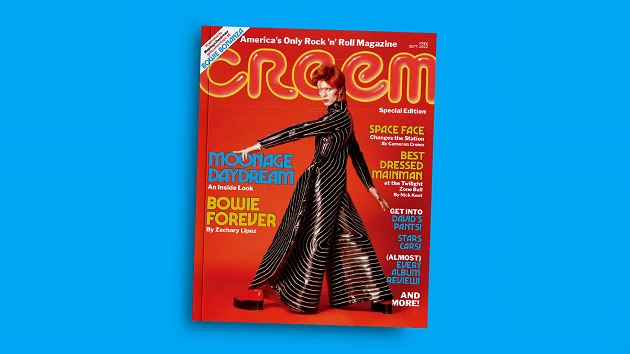 As recently reported, CREEM magazine is returning after 33 years out of print, with its first new issue arriving September 15. Now, ABC Audio can exclusively reveal that a separate special David Bowie-themed edition of the mag will be included with every copy of the relaunched CREEM‘s Issue #1 for those who subscribe to the magazine by Wednesday, August 17.

As previously reported, the new CREEM will be available as an oversized subscription-only premium quarterly publication, while digital-only subscriptions also are available.

CREEM Issue #1 will include features on Slash, The Who and new artists like punk act Special Interest, and will boast a cover by legendary artist Raymond Pettibon, whose work includes the covers of albums by Sonic Youth and Black Flag.

Moonage Daydream, which is the first Bowie documentary officially sanctioned by his estate, is described as “a sublime kaleidoscopic experiential cinematic odyssey that explores Bowie’s creative, spiritual, and philosophical journey.”