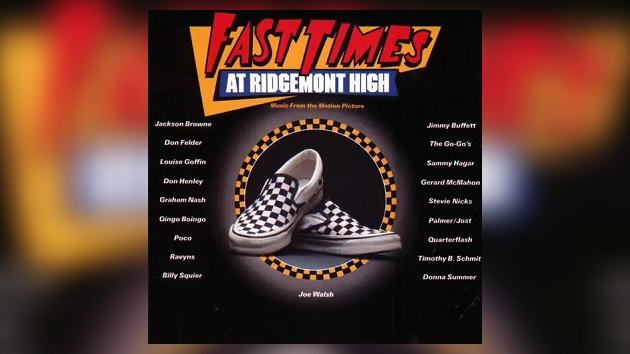 Sammy Hagar was among the many well-known artists who contributed original songs to the soundtrack of the classic teen comedy-drama Fast Times at Ridgemont High, which premiered 40 years ago this Saturday.

Hagar wrote and recorded the movie’s title song, a riff-heavy rock tune that Sammy notes was one of a series a tunes he recorded specifically for films around that time.

“They just would send me the script of the movie, and I would read…through it,” Hagar explains to ABC Audio. “And they didn’t ask me to write the title track. I just wrote a song called ‘Fast Times at Ridgemont High.’ So…lyrically, I just kind of mimicked what was going on in the movie. You know, just a bunch of high school kids messing up…and trying to get laid, basically.”

The Red Rocker says having one of his songs as the title track of a popular movie then felt like he’d hit the “big time.”

Hagar notes that he always enjoyed writing songs for films, explaining, “I loved having a theme. For a songwriter, the first thing you need to have, after you have the [music]…I needed a title, a subject. ‘What am I writing about?’ And when they would hand that to you in a script in a movie…I just said, ‘Oh, yeah. Boom! I know what to do.'”

Meanwhile, Hagar says one of the cool things about his “Fast Times” song was getting to work with a soundtrack musician who was experimenting with synthesizers, and who added an effect that Sammy described as sounding “like a knife being sharpened.”

“It was so advanced [at the time],” Hagar notes. “It was really cool…You know, no one had ever heard anything like that before.”