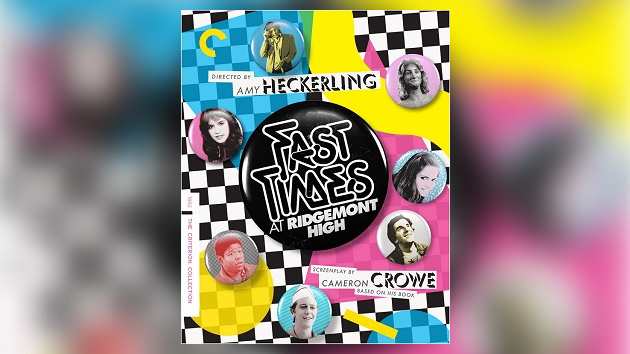 This Saturday, August 13, marks the 40th anniversary of the premiere of the classic teen comedy-drama Fast Times at Ridgemont High.

For starters, the screenplay was written by one-time Rolling Stone journalist Cameron Crowe, who went on to write and direct such rock-themed movies as Singles and Almost Famous.

Meanwhile, Heart guitarist Nancy Wilson appears in a scene in which Judge Reinhold‘s character Brad Hamilton tries — and fails — to flirt with her.

–In a scene featuring Leigh’s Stacy Hamilton and Cates’ Linda Barrett, as the two friends chat in the high school cafeteria, they realize that several of their female classmates have “cultivated the Pat Benatar look.”

–As the shy, nerd-ish Mark Ratner, portrayed by Brian Backer, nervously prepares for his first date with Stacy, his smooth-talking but sketchy pal Mike Damone — played by Robert Romanus — shares his special five-point plan for a successful date. Point five? “When it comes down to making out, whenever possible, put on side one of Led Zeppelin IV.”

–Just before the end credits of the film roll, we’re informed that Penn’s perpetually stoned surfer-dude character Jeff Spicoli has won a bunch of reward money for saving model/actress Brooke Shields from drowning, but spent all the cash to hire Van Halen to play his birthday party.