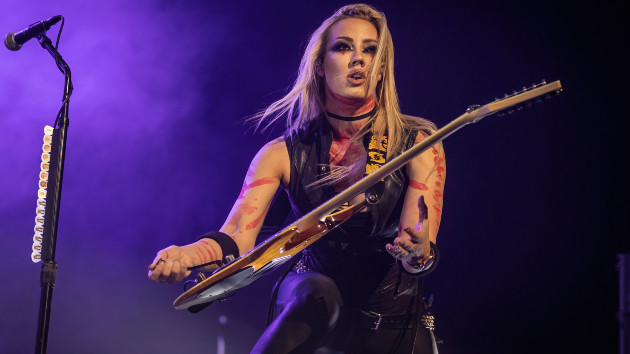 Following her debut with Demi Lovato‘s band on ABC’s Jimmy Kimmel Live! on Thursday, Nita Strauss has confirmed that she’s joining the pop star on the road, too.

In an Instagram post Friday tagging Lovato, Strauss writes, “Let’s rock, @ddlovato! Excited to dive into this show and have some fun.”

News of Strauss’ involvement comes after the longtime Alice Cooper touring guitarist announced earlier this week that she wouldn’t be joining the shock rocker on his upcoming fall tour.

“There is no drama whatsoever and my touring year is still VERY full,” Strauss wrote at the time. “In fact, I’m on a flight straight into the next adventure as I post this, and I’ll be on stage again much sooner than you think!”

Outside of her work in Cooper’s band, Strauss released her debut solo album, the instrumental Controlled Chaos, in 2018. Her 2021 solo single, “Dead Inside,” which features vocals by Disturbed‘s David Draiman, became the first song by a solo female artist to hit #1 on Billboard‘s Mainstream Rock Airplay chart in 32 years.