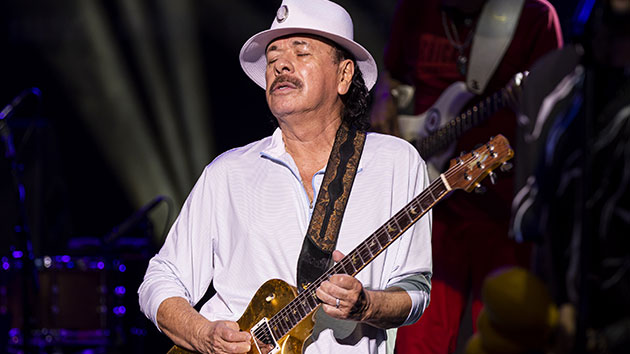 Carlos Santana reportedly passed out onstage during a Tuesday concert at Pine Knob Music Theatre, an outdoor amphitheater in Clarkston, some 40 miles northwest of Detroit, Michigan.

The 74-year-old rock legend was about an hour into his concert when he was “overcome with heat exhaustion and dehydration,” his manager, Michael Vrionis, said in a statement obtained by ABC News.

“Carlos was taken to the emergency department at McLaren Clarkston for observation and is doing well,” the statement continued.

“The show for tomorrow July 6th at The Pavilion at Star Lake (formerly the S&T Bank Music Park) in Burgettstown, PA. will be postponed to a later date. More details to follow thru Live Nation,” Vrionis added.

Santana was introducing the song “Joy,” from his 2021 album Blessings and Miracles, shortly before he passed out, according to Detroit Free Press journalist Jo-Ann Barnas. He was describing the song as “mystical medicine music to heal a world infected with fear.”

Santana was treated for about 20 minutes before medical staff covered him with a tarp and wheeled him offstage, according to social media posts and video.

“Ladies and gentlemen as you can we see have a severe medical emergency,” the venue staff reportedly announced to the audience. “Let’s share our prayers…We need it right now…Please send your light and love to this man.”

Last year, the Rock & Roll Hall of Famer canceled the December dates of his Las Vegas residency to recover from what was described as “an unscheduled heart procedure.” He was scheduled to perform eight dates at the House of Blues at Mandalay Bay Resort and Casino. Santana also announced that he tested positive for COVID-19 in February.