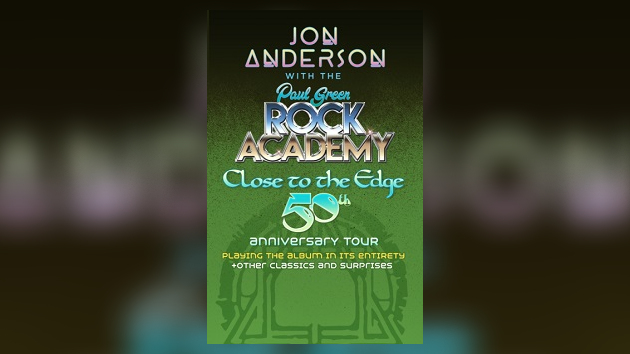 Anderson will be joined by over 20 talented young musicians at the concerts, which will feature a performance of Yes’ entire 1972 album Close to the Edge in honor of its 50th anniversary, as well as renditions of other songs by the legendary prog-rock band, tunes from Jon’s solo catalog, mash-ups and more.

“If you come you’re gonna to have a great time,” Anderson tells ABC Audio about the upcoming concerts. “I mean, seriously, these teenagers, ranging from 14 to 17, are just brilliant musicians.”

Released in September 1972, Close to the Edge peaked at #3 on the Billboard 200. The album features three long musical pieces — the title track, “And You and I” and “Siberian Khatru.”

Anderson explains that before his latest tour with the Paul Green Rock Academy, he’d already performed “And You and I” with the teens, and for his trek with them earlier this year, they added the epic “Close to the Edge” to the set.

“They had a ball doing it. I loved it,” Jon notes. “So, we thought, ‘Okay, we’re gonna do some shows this summer, so why don’t we celebrate the fact that it was 50 years ago that we did the album Close to the Edge?’ So they learned ‘Siberian Khatru.’ So we’re doing the whole album, which will be…wonderful chaos.”

Anderson says the shows also will feature a performance of “So Limitless,” a song he co-wrote with and recorded last year with members of the Rock Academy, as well as mashups including a Lenny Kravitz tune and Led Zeppelin‘s “Kashmir.”

The tour runs through an August 6 show in Albany, New York.