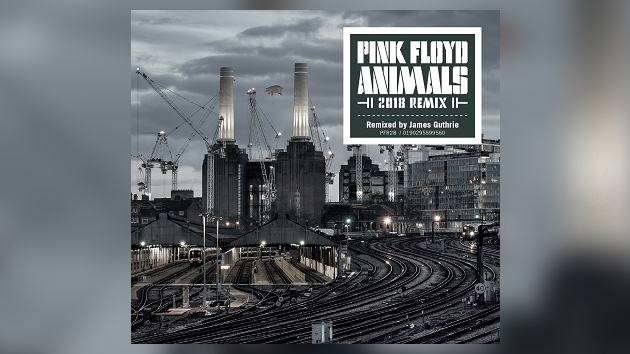 The Animals reissue will be available individually on CD, vinyl LP, Blu-ray and SACD on September 16, and as a deluxe multiple-disc package on October 7.

The Deluxe version includes a CD, an LP, an audio Blu-ray, an audio DVD, and a 32-page book. The Blu-ray and DVD discs feature Guthrie’s 2018 remix in stereo and 5.1 Surround Sound, as well as the original 1977 stereo mix. The booklet contains rare seen behind-the-scenes images from the Animals album-cover photo shoot, along with pics of Pink Floyd playing live and band memorabilia.

The reissue boasts a reimagined and updated version of the cover, which famously featured the image of a giant inflatable pig tied by ropes to the chimneys of London’s Battersea Power Station.

Animals, Pink Floyd’s 10th studio effort, was released in January 1977 and peaked at #3 on the Billboard 200, going on to sell over 4 million copies in the U.S. The concept album, which was loosely based on George Orwell‘s dystopian novel Animal Farm, and was inspired by the socio-political climate of the U.K. during the mid-1970s.

Last June, ex-Pink Floyd singer/bassist Roger Waters posted a lengthy message explaining the Animals reissue had been delayed because of a conflict he had with former band mate David Gilmour over sleeve notes.

You can preorder the Animals reissue now.