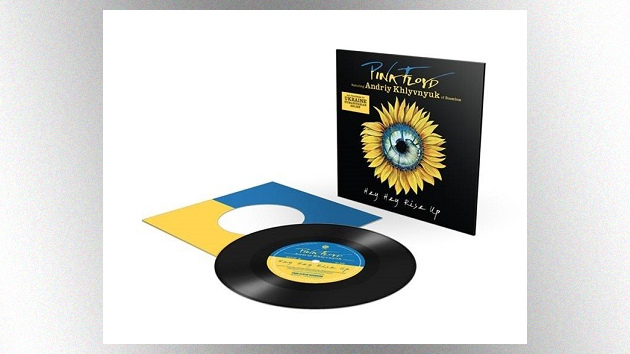 Pink Floyd has announced plans to release a physical version of its new song “Hey Hey Rise Up,” which the band recorded with singer Andriy Khlyvnyuk of Ukrainian band Boombox and first made available as a digital single in April.

“Hey Hey Rise Up” now will be released on CD and as a seven-inch vinyl single on July 15 in the U.K. and most other countries, while it won’t be available in the U.S., Canada, Mexico and Australia in those formats until October 21, and in Japan until August 3.

The CD and vinyl single also will include a second track, a newly reworked version of the 1994 Pink Floyd song “A Great Day for Freedom,” which originally appeared on the band’s 1994 album The Division Bell.

As previously reported, “Hey Hey Rise Up” was recorded in late March and uses vocals taken from an Instagram post showing Andriy singing the Ukrainian protest song “The Red Viburnum in the Meadow” while standing in Kyiv’s Sofiyskaya Square. The song, which was written during World War I, has become an anthem in Ukraine protesting Russia’s invasion of the country.

For the updated version of “A Great Day for Freedom,” Gilmour reworked the track using the original tapes, which also feature Mason and late Pink Floyd keyboardist Richard Wright, along with backing vocalists Sam Brown, Claudia Fontaine and Durga McBroom.

You can preorder the CD and vinyl single now. Proceeds raised by the discs and the digital version of “Hey Hey Rise Up” will benefit Ukraine humanitarian relief efforts.