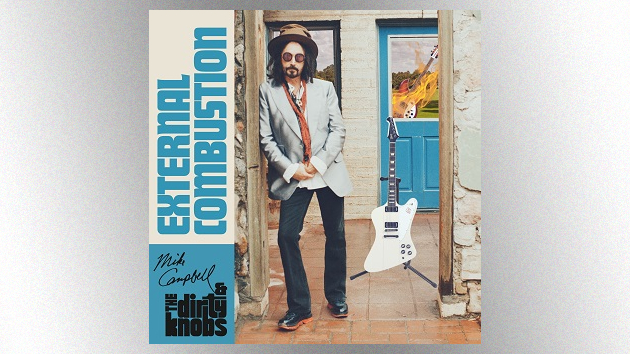 Campbell and his group are supporting their sophomore album, External Combustion, which was released in March. A follow-up to the group’s 2020 debut, Wreckless Abandon, the new record is an 11-track collection that includes guest appearances from Mott the Hoople frontman Ian Hunter, Heartbreakers keyboardist Benmont Tench, and acclaimed alt-country artist Margo Price.

Campbell tells ABC Audio that he’s “a huge fan” of Hunter and Mott the Hoople, and explains that the collaboration came about after Ian had tapped him to add guitar to some of his new tracks, and, in return, he asked Hunter if he’d sing on one of his own new tunes.

“[W]e had this song called ‘It’s a Dirty Job,’ and he was gracious to do it,” Mike notes. “He puts some Mott the Hoople piano in it, and he sang a verse and some harmonies, and he really brought the song up with his presence.”

As for Tench, Campbell says he asked his longtime band mate to play piano on a tune called “Lightning Boogie,” which he figured Benmont would like.

“[H]e just killed it,” Mike notes. “He added his flavor to it, so it’s got a little Heartbreakers nuance to it.”

Campbell says Price’s contributions to External Combustion came about when he got together with her to do some songwriting. Mike wound up asking Margo to sing on two tracks — “State of Mind” and “Cheap Talk.”

“[S]he did a great job and really made the songs better,” Campell says.

Visit TheDirtyKnobs.com to check out the band’s full tour schedule.