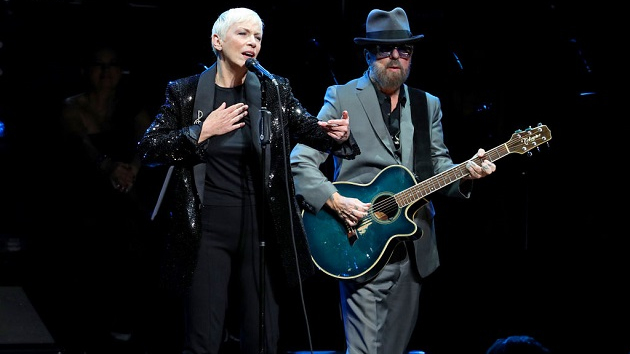 As announced earlier this month, Eurythmics are among the 2022 Rock & Roll Hall of Fame inductees, who will be honored at a November 5 ceremony in Los Angeles.

Multi-instrumentalist Dave Stewart who along with singer Annie Lennox make up the U.K. duo, tells ABC Audio that when they were informed about the honor, they jokingly offered a low-key response, “but actually we were very excited to hear that.”

As he notes, “[W]e’re very British — Annie’s Scottish, I’m English — [and have a] very dry sense of humor with each other, [and] I was playing it…down.”

Stewart and Lennox also will be inducted into the Songwriters Hall of Fame this June, and Dave reveals that he and Annie plan to perform at both events.

Stewart says he and Lennox have already been discussing how they might approach their Rock Hall performance, and he explains that although they haven’t made any definite decisions, he thinks “it’ll be a mixture” of playing as a duo and presenting tunes with a full backing band.

As he notes, “[W]e might ramp up all the way to a full-on ‘Would I Lie to You,’ with horns and all sorts of things.”

Dave tells ABC Audio that he has great respect all of his fellow Rock Hall honorees, because he knows the perseverance and passion it takes to mount a successful music career.

“There’s some kind of mixture of determination and insanity that gets people all the way to this point,” he maintains, “where a lot of people would’ve turned back.”

“[She’s] such a sort of inventive and brilliant woman [who] has endured so much,” Stewart enthuses. “And also, what a songwriter.”