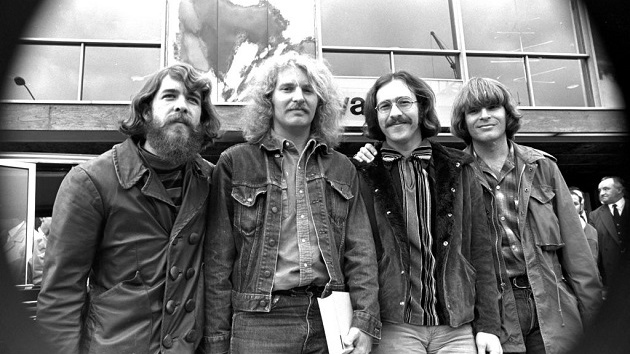 The movie, titled Travelin’ Band: Creedence Clearwater Revival at the Royal Albert Hall, is narrated by Oscar-winning actor and CCR fan Jeff Bridges, and directed by Grammy-winning filmmaker Bob Smeaton, whose credits include The Beatles Anthology series and Jimi Hendrix Band of Gypsies.

Travelin’ Band will be the first movie ever to feature footage of a full concert by Creedence Clearwater Revival‘s classic lineup of John Fogerty, Tom Fogerty, Stu Cook and Doug “Cosmo” Clifford.

The film follows the band from their early years in their hometown of El Cerrito, California, to their emergence as one of the most popular rock groups in the world, performing at Woodstock and selling out the Oakland Coliseum before heading overseas for a European trek that included the Royal Albert Hall show.

Travelin’ Band offers a treasure trove of rare and unseen footage, including recently rediscovered 16-mm film of the concert, behind-the-scenes clip of the band members, and interviews from the archives of the Fantasy Records label. The movie also includes what is thought to be the earliest known footage of the group playing live.

Audio of the concert has been mixed and restored using the original multi-track tapes by Beatles reissue producer Giles Martin and his studio collaborator Sam Okell.

Smeaton says that while working on the film, “I was able to see and hear why [CCR] are worthy of their status as one of the greatest bands of all time. I knew they were good, I never knew they were that good.”