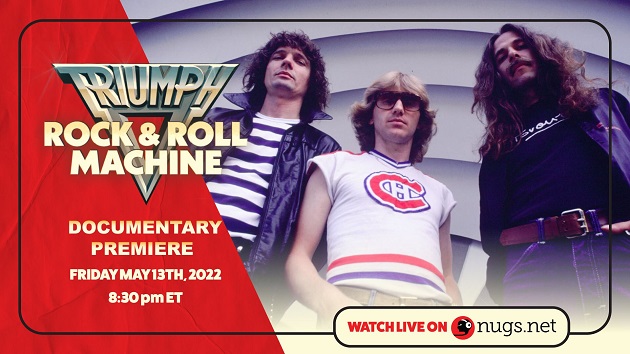 Triumph: Rock & Roll Machine, the 2021 documentary about the Canadian power trio Triumph, will get its global streaming premiere via the nugs.net platform on Friday, May 13, at 8:30 p.m. ET. The event will begin with an exlcusive Q&A session with the band’s three members — singer/guitarist Rik Emmett, drummer/singer Gil Moore and bassist/keyboardist Mike Levine.

Tickets for the event cost $19.95, and can be purchased now exclusively at nugs.net/Triumph. Streaming is available everywhere except Canada. Fans who buy tickets will be able to watch the film during the live premiere or can stream it on demand for 48 hours after pressing “play. On-demand access will be available through May 30.

Fans can submit questions that the band members may answer during the pre-screening Q&A at Facebook.com/TriumphTheBand.

Triumph: Rock & Roll Machine got its world theatrical premiere at the 2021 Toronto International Film Festival last September.  The movie profiles the Toronto-based rockers’ rise to popularity during the 1970s and early ’80s, the fallout from Emmett’s unexpected split with the group in the late 1980s, and the band’s 2019 reunion.

Meanwhile, a soundtrack album to the documentary will be released digitally this Friday, April 29.