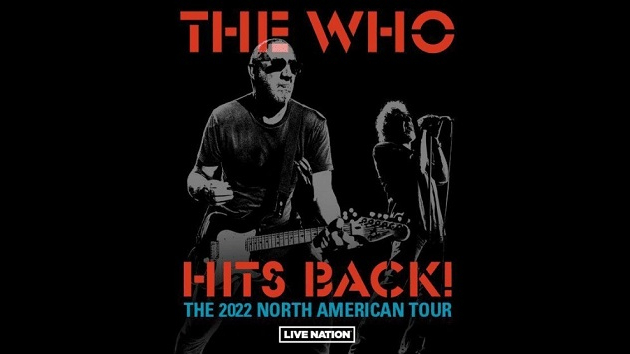 The Who launches its The Who Hits Back! tour tonight in Hollywood, Florida, which sees the British rock legends returning to the road for the first time since wrapping up their Moving On! trek in October 2019.

As previously announced, the band’s 2022 North American tour features two legs, with the first wrapping up May 28 in Bethel, New York, and the second running from an October 2 concert in Toronto through a November 4-5 engagement in Las Vegas.

Notable stops on the outing’s first leg include an April 30 headlining performance at the New Orleans Jazz & Heritage Festival and a May 15 show at Cincinnati’s TQL Stadium. The latter gig will mark the first time in 43 years that the band will play Cincinnati, the site of the tragic 1979 incident in which 11 people were killed at Riverfront Coliseum when fans rushed the doors of the venue ahead of a Who show there.

Meanwhile, just in time for the start of the tour, The Who have announced the lineup of artists that will be opening for them at most shows. The support acts for the first leg include singer/songwriter Leslie Mendelson, soul singer Amythyst Kiah, Texas roots rockers Los Lonely Boys, veteran singer/songwriter Willie Nile, and contemporary British rock band The Wild Things.

Opening for The Who during the second leg are ex-Barenaked Ladies frontman Steven Page, Tom Petty guitarist Mike Campbell and his current band The Dirty Knobs, and, again, The Wild Things, who will perform at the two-show finale in Las Vegas.

Like the Moving On! tour, the new trek will feature The Who accompanied by an orchestra at all shows.

Visit TheWho.com to check out the band’s full tour schedule and which support act will be performing at each concert.