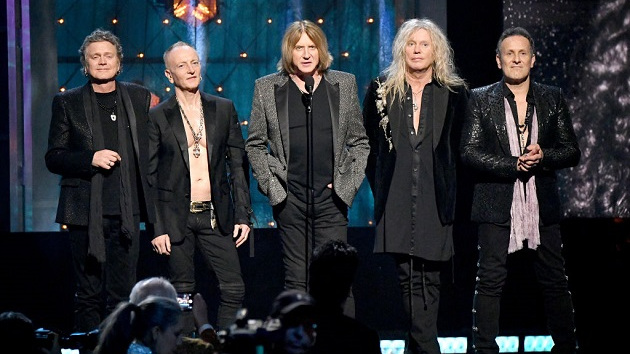 Def Leppard has debuted a second advance track from their forthcoming 12th studio effort, Diamond Star Halos, a melodic rock gem called “Take What You Want” that kicks off the album.

“Take What You Want” combines all the elements of the classic songs from Def Leppard’s heyday, including a jangly guitar intro, catchy riffs, soaring vocals, and blazing guitar solos.

The track is available now via digital formats. “Take What You Want” was preceded by the album’s first single, the rocking “Kick.” The band also released a music video for “Kick.”

As previously reported, Diamond Star Halos, which is due out May 27, is a 15-track collection that’s the band’s first album of new original tunes since 2015’s self-titled effort. It can be pre-ordered now as a deluxe package, a two-LP set and digitally, among other configurations.

Diamond Star Halos will arrive in advance of Def Leppard’s 36-city Stadium Tour of North America with Mötley Crüe, Poison and Joan Jett & the Blackhearts. The trek gets underway June 16 in Atlanta, and is mapped out through a September 9 concert in Las Vegas.