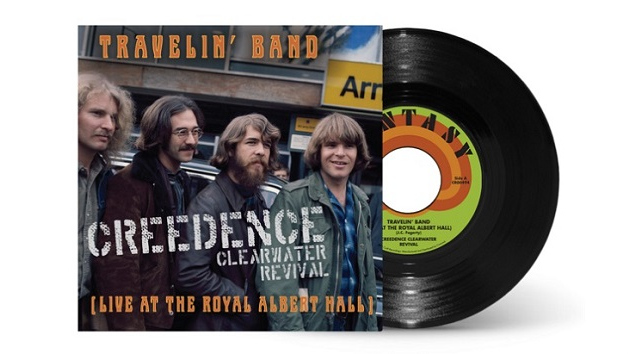 The disc, which will feature renditions of the CCR classics “Travelin’ Band” and “Who’ll Stop the Rain,” will be available at participating retailers on the second Record Store Day drop date of 2022 — June 18.

The version of “Travelin’ Band,” which appears on Side A of the single, is an unreleased performance of the song that Creedence played at the Royal Albert Hall on April 14, 1970. The rendition of “Who’ll Stop the Rain” was recorded on January 31, 1970, at the Oakland Coliseum in California, and previously appeared on the CCR live album The Concert, which was released in 1980.

Only 9,000 copies of the vinyl single will be pressed. The packaging replicates the sleeve of the double-sided single Creedence Clearwater Revival released in January 1970 featuring the studio versions of “Travelin’ Band” and “Who’ll Stop the Rain.” The enduring tunes peaked at #2 on the Billboard Hot 100, and both tracks also were included on CCR’s chart-topping 1970 studio album, Cosmo’s Factory.

In 2020, CCR drummer Doug “Cosmo” Clifford told ABC Audio that plans were in the works to release the entire 1970 Royal Albert Hall concert as a live album, so it’s possible that an official update about that release may be announced soon.