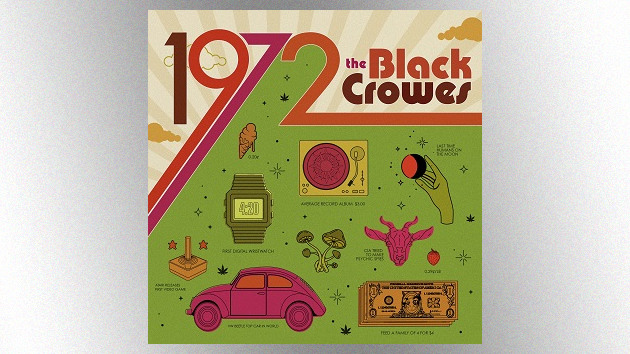 The Black Crowes will release a six-track EP titled 1972 that finds the band celebrating the 50th anniversary of some of their favorite songs.

The EP, which you can pre-order now, will be available digitally exclusively via Amazon Music on May 4, and will get a wide release on CD and vinyl on May 6.

1972 includes covers of six tunes selected by the band in collaboration with Amazon Music. The songs, which were recorded this past January at Los Angeles’ historic Sunset Sound studio, are renditions of The Rolling Stones‘ “Rocks Off,” T. Rex‘s “The Slider,” Rod Stewart‘s “You Wear It Well,” Little Feat‘s “Easy to Slip,” David Bowie‘s “Moonage Daydream,” and The Temptations‘ “Papa Was a Rollin’ Stone.”

The “Papa Was a Rollin’ Stone” was released as an advance digital single today via Amazon Music.

“The year 1972 was a watershed moment, some of the greatest rock and roll songs ever made came out of that year,” Black Crowes frontman Chris Robinson says. “To get our band back together in the studio, it had to be a celebration of rock and roll. This record is about love and devotion to something that makes us feel good. We hope that it makes fans around the world feel the same.”

The Black Crowes will celebrate the EP’s release with a special performance taking place May 4 at 10 p.m. ET at the famed LA-area club the Whiskey a Go-Go that will be livestreamed at Amazon Music’s channel on Twitch.

During the streaming event, physical copies of the 1972 EP and exclusive merchandise will be available for purchase.

Meanwhile, a behind-the-scenes video focusing on the 1972 sessions has been posted at The Black Crowes’ YouTube channel.