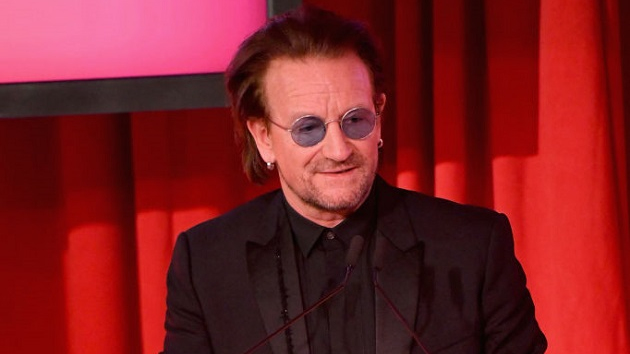 U2 frontman Bono was honored by the Fulbright Association on Thursday in Washington, D.C., with its 2021 J. William Fulbright Prize for International Understanding, acknowledging the singer’s his dedication to fighting global poverty and health crises, and supporting economic development in the world’s poorest regions.

In conjunction with the prize, Bono received an award of $50,000 to donate to the charities of his choice, which he bestowed on the ONE and (RED) organizations he co-founded.

During his acceptance speech, Bono talked about his passion for rock music, which is all about freedom and liberation, drawing parallels to the ideals of the U.S. and to Ukraine’s current fight for freedom against its Russian invaders.

Reflecting on growing up in Ireland during a time of great conflict there, Bono noted, “We looked to America. We saw a country with its own long-running arguments, its own injustices. We knew this promised land wasn’t always keeping to that promise. We knew America wasn’t living up to all its ideals, but the fact is America had ideals.”

He continued, “We knew that because you wrote them down, you cited them, you held yourself to account on them. They shaped the struggle for civil rights and women’s rights and gay rights. I don’t know how, but I seemed to know that America wasn’t just a country. I felt it was an idea.”

In honoring Bono with the Fulbright Prize, Justice Cynthia A. Baldwin, Fulbright Association Board Chair, said, “The purpose of the Fulbright Prize is to recognize those who promote peace through greater understanding among peoples, cultures, and nations, and there’s no doubt that Bono embodies the best of leadership in times of unrelenting global crises and challenges.”

You can watch a video of the presentation at the Fulbright Association’s YouTube channel.