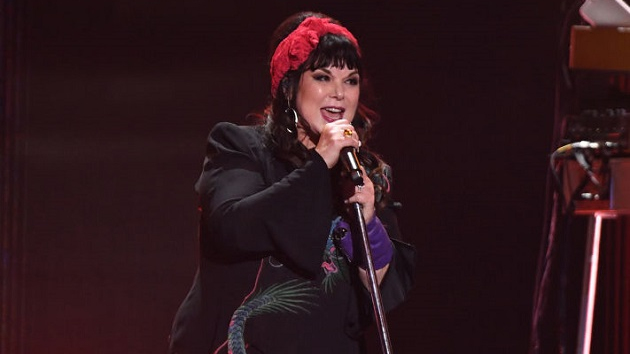 Wilson explains that the song “tells the story of a one-hit-wonder in the star-maker machinery of Hollywood: the sublime cruelty of transient fame.”

Ann, who’s had her fair share of sobering dealings with the entertainment industry, further notes, “It’s one of those anti-Hollywood screed things, the meat grinder of the music image maker machine and what it feels like to be on the inside of that.”

She adds, “All of a sudden, it’s ‘happening’ on all thrusters, you’ve got a number one record and everyone’s pouring champagne telling you how much you ‘deserve this.’ You’re in heaven! But then the cruel reality comes down…what’s the next one? Can you follow that? It’s all about the short-lived glamour and ecstasy of being successful in the rock business.”

“A Moment in Heaven” is available now via digital formats, while a lyric video for the tune has premiered on her official YouTube channel. The clip features a mix of animation and live action, including footage of Wilson performing with her backing band.

“A Moment in Heaven” is the third advance tune that Ann has released from Fierce Bliss, following an original song called “Greed” and a cover of Eurythmics‘ “Missionary Man.”

As previously reported, Fierce Bliss will be released on April 29, and can be pre-ordered now. Wilson will kick off a series of tour dates with her backing band The Amazing Dawgs in support of the album with a May 4 concert in San Francisco. Among her forthcoming performances are two Canadian shows opening for Journey, on May 13 in Toronto and May 16 in Quebec City.