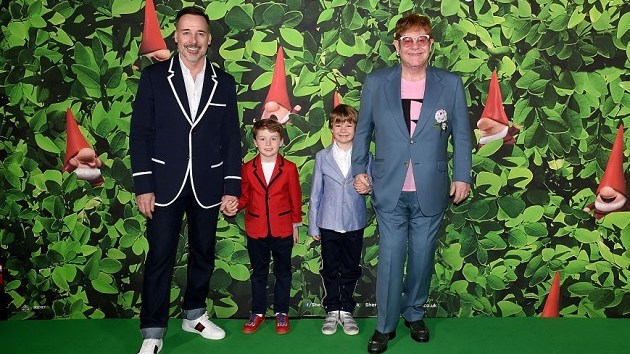 Elton John was a guest on Friday’s episode of his pal Dua Lipa‘s podcast At Your Service, and among the topics they discussed were those unexpected moments that change your life completely. Elton revealed it was one of those moments which has led to his greatest happiness: becoming a father.

“I was never going to have children,” Elton told Dua. But several years ago, he and his husband David visited an orphanage in Ukraine, where he found himself carrying around an 18-month-old boy for a few hours.

“Then we had a press conference at the end,” Elton recalls. “And they said, ‘You seem very fond of this little boy. Would you think of adopting him?’ And I went, ‘Oh yeah, I’d actually love to.'”

That, of course, made headlines, but it turned out that Elton and David weren’t allowed to adopt the boy, nor his half-brother, because they were “too old” and, Elton says, “Because I was gay, they wouldn’t allow us to do it anyway.”  But Elton and David were determined to get the boys out of the orphanage, and, he says, “Luckily they had a grandmother who took them.”

But then, Elton says, David asked him about having their own children.

“I always said no, but this little boy was telling me something,” Elton recalled. “He was saying, ‘Come on, you can be a dad.’ And that’s when we decided to have children, because of this little boy Lev, in Ukraine.”

While Elton and David continue to make sure Lev and his brother are safe, they’ve since welcomed their own children, Zachary and Elijah.  And Elton’s desire to spend more time with them is why he tells Dua of his Farewell Tour, “I will be happy when it’s over.”