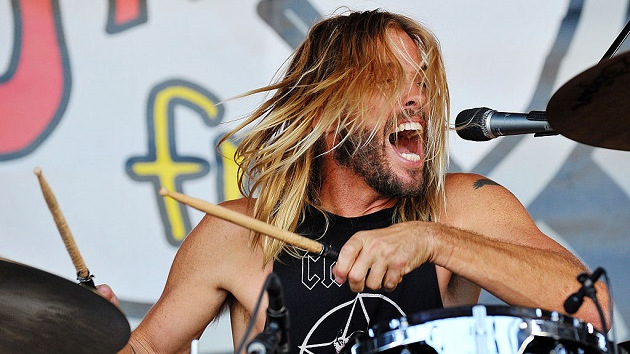 The music world is reacting to the shocking and unexpected death of Foo Fighters drummer Taylor Hawkins, who passed away Friday at age 50 in Bogota, Colombia, where his band had been scheduled to perform that night at a festival.

Among the famous artists who have posted tributes to Hawkins on their social media pages are Mick Jagger, Ringo Starr, Jimmy Page, Stevie Nicks, Aerosmith and many more.

Here are some of the many homages, a number of which have been edited for length:

Mick Jagger: “So incredibly sad to hear of the passing of Taylor Hawkins. My thoughts are with his family and the band at this time.”

Jimmy Page: “After the Led Zeppelin show at the O2, I was invited to play at Wembley Stadium with the Foo Fighters on 7th June 2008. We played Rock and Roll with Taylor on turbocharged vocals and Dave on drums and then for Ramble On they swapped, with Taylor on drums and Dave Grohl on vocals. We put in some serious versions of these two songs. It was so good to play with him. I really admired him and he was a brilliant musician: his technique, his energy and spirited enthusiasm. On this sad day, I would like to send my condolences to his family, his band members in the Foos and his fans.”

Stevie Nicks: “He always came to my shows. He and his best friend Dave even let me be a Foo Fighter for a little while. We recorded a kick a** version of Gold Dust Woman (live) and at the end of the song I yelled out ‘Best Gold Dust Woman ever.’ And I meant it… Taylor was very handsome and he was very cute…He had a huge heart and a glorious smile. When he walked into the room, everyone looked up. When he left the room, everyone was sad…Don’t forget us, ‘ T.’ We’ll be right here.”

Aerosmith: “Such a devastating loss. REST IN PEACE Taylor! Our hearts to out to his friends and family.”

Ozzy Osbourne: “@taylorhawkinsoffical was truly a great person and an amazing musician. My heart, my love and my condolences go out to his wife, his children, his family, his band and his fans. See you on the other side.”

Queen‘s Brian May: “No. It cannot be. Heartbroken. Taylor, you were family to us. Our friend, our brother, our beloved child. Bless you. We will miss you so bad.”

Axl Rose: “Shocked n’ saddened to hear of the passing of Taylor Hawkins. He was a really great guy, drummer n’ family man. Was always great to see him! Was looking forward to seeing him n’ everyone in Daytona. Truly saddened. My deepest condolences to his family, the Foo Fighters n’ their fans.”

Slash: “Devastated by the loss of our friend #TaylorHawkins I’ve no words to express all the feelings I have about his passing. But my heart goes out to his family. & his band & friends. RIP Taylor.”

Metallica‘s Lars Ulrich: “Thank you for always having the biggest warmest smile on your face and for lighting up every room with your infectious energy and good vibes…At BottleRock recently, I had the best seat in the house right above you and once again stood in amazement watching as you effortlessly steered Foo Fighters through a two hour festival set with the perfect balance of swing, swagger, bounce and insane chops…Your phone call a week ago touched and inspired me and I will always be appreciative for you championing our community as in your parting words…’Drummers stick together!’ Damn right brother. Except now the community is lesser without you. Rest In Peace.”

KISS‘ Gene Simmons: “Hearts broken all over the world. Taylor Hawkins was a kind soul & a monster musician. Drummer for the Foos, Alanis Morissette & Sass Jordon (who I managed for a time). Taylor and his band were to play our Kiss Kruize in Oct…Prayers and condolences to the Hawkins family.”

KISS‘ Paul Stanley: “Speechless and Gutted. Taylor was a great guy, a dad and a husband. My heart goes out to them, Dave and the band. What awful news.”

Green Day‘s Billie Joe Armstrong: “Shocked and devastated . To Taylor Hawkins family and the Foo Fighters family. Our hearts are with you. Always.”

Brian Wilson: “I’m heartbroken to hear about Taylor Hawkins. He was such a nice young man. Love & Mercy to Taylor’s family and friends.”

The Doors‘ John Densmore: “A great, great, drummer and friend has passed. Taylor had written on his bass drum, ‘RIP Charlie (Watts)’. Now, RIP Taylor. It is a very sad day.”

Tom Morello: “God bless you Taylor Hawkins. I loved your spirit and your unstoppable rock power. Rest In Peace my friend.”

Liam Gallagher: “Absolutely devastated to hear the sad news about Taylor Hawkins my thoughts and prayers are with his family and friends RIP brother.”

Joan Jett: “We are gutted to hear about the passing of our dear friend Taylor Hawkins. He was an incredible musician and the kindest, warmest person who always had the biggest smile in the room. We send our love to his wife, children, Dave, Pat, Chris, Rami, Nate and the entire Foos’ family. We love you guys and we will miss Taylor immensely.”

Wolfgang Van Halen: “I’ll never forget meeting Taylor on tour in San Diego in 2012. He was such a ridiculously kind man. The dude just emanated cool. Him, my pops and I talked for as long as we could until we had to leave. An incredible drummer and singer, he was a constant inspiration to me throughout my entire life. This is like a kick in the gut…My most heartfelt condolences go out to his family…You’ll be so sorely missed, Taylor…Rest In Peace.”