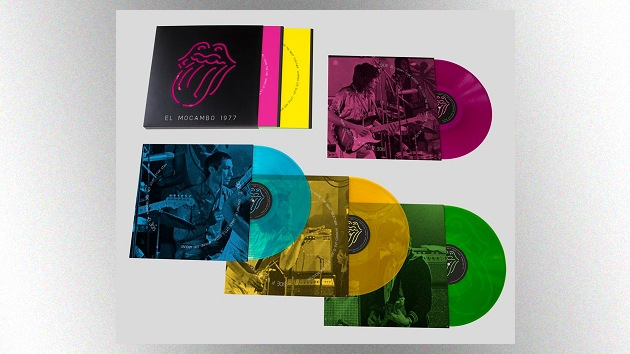 A new archival Rolling Stones concert album, Live at the El Mocambo, featuring performances from two Toronto club shows that the British rock legends played on March 4 and 5, 1977, will be released on May 13.

The album, which will be available as a two-CD set, a four-LP collection on either black or neon vinyl, and digitally, features The Rolling Stones’ full March 5 concert plus three bonus performances from the previous night.

In advance of the album, two performances have been released today via digital formats — renditions of “It’s Only Rock ‘n’ Roll (But I Like It)” and “Rip This Joint.”

The concerts at the 300-capacity El Mocambo club were booked as secret shows, where attendees had won the tickets to see Canadian rock group April Wine. The Stones were billed as the support act for the two nights, under the moniker The Cockroaches. When fans got to the venue, it was April Wine that opened the show, followed by, well, you know who.

The Stones’ set list included such covers as Muddy Waters‘ “Mannish Boy,” Bo Diddley‘s “Crackin’ Up,” Big Maceo‘s “Worried Life Blues” and Willie Dixon‘s “Little Red Rooster,” as well as classic originals like “Honky Tonk Women,” “Jumpin’ Jack Flash,” “Let’s Spend the Night Together” and “Tumbling Dice.” The band also presented live of “Worried About You,” which later would be released on 1981’s Tattoo You.

Only four songs from the El Mocambo concerts have been officially released previously, appearing on 1977’s Love You Live album alongside many tracks that were captured during The Stones’ 1975 and ’76 tours.

Live at the El Mocambo can be pre-ordered now.

As previously announced, The Stones launch their 60th anniversary tour June 22 in Madrid.