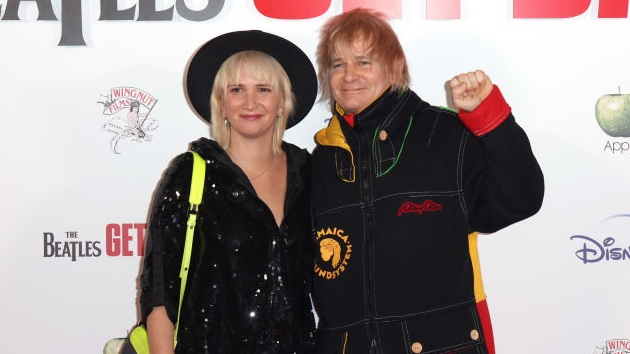 Love reigned over Zak Starkey this week! People reports that on Monday, Ringo Starr‘s oldest son and The Who‘s touring drummer since the 1990s got married to his longtime partner and fellow musician, Sharna “Sshh” Liguz.

According to the the magazine, the nuptials took place in West Hollywood, California, at the Sunset Marquis, and featured an intimate gathering of family and friends.

Ringo was on hand to give his son away, while two other rock greats, Pearl Jam frontman Eddie Vedder and former Smiths guitarist Johnny Marr, served as Zak’s best men. Zak played in Marr’s group Johnny Marr & The Healers during the late ’90s and early 2000s.

Zak, 56, and Sharna, 37, have been a couple for almost 20 years, and picked Monday to get hitched because it was the first birthday of their daughter, Luna Lee Lightnin.

In a statement shared with People, Zak and Sharna wrote, “After 18 years together, Luna’s umbilical cord kinda tied the knot but we wanted to make it official and share with our friends and family in the U.S., before doing the same in Jamaica and the U.K.”

Starkey also posted a message on his Instagram page on Wednesday that reads, “Great to be solid with the greatest girl in the world. And to celebrate Luna’s no1 birthday. Thanks to everyone who came from near far wide abstract and online. Our dearest friends in da USA — great to see u at our wedding and experience true party stamina. Feels great to be wed to the woman I have loved for 18 years.”

Zak and Sharna record and perform together as the rock duo Sshh, and also co-founded the record label Trojan Jamaica.