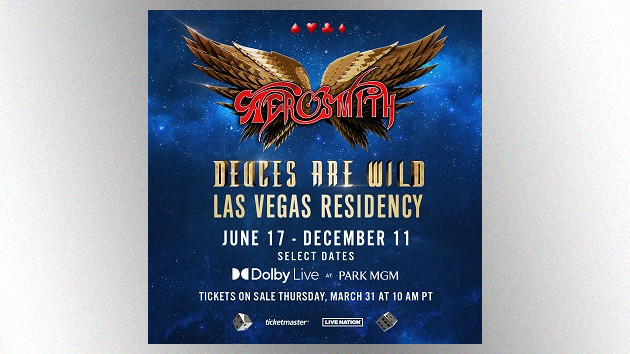 After being forced off the road since 2020 because of the COVID-19 pandemic, Aerosmith will be getting back in the saddle this year with a new series of their “Deuces Are Wild” Las Vegas residency shows at the Dolby Live at Park MGM theater.

The Rock and Roll Hall of Famers have scheduled three eight-show engagements at the venue, running from June 17 to July 8, from September 14 to October 5, and from November 19 to December 11. According to a press statement, the shows will be the first concert experience presented in immersive Dolby Atmos audio technology.

For their “Deuces Are Wild” show, Aerosmith will deliver a 90-minute performance, accompanied by a 12-screen multimedia presentation that includes previously unseen visuals from the band’s archives.

“The only rust at Dolby Live is going to be on our van in the lobby!” says Aerosmith frontman Steven Tyler. “We are locked, cocked and loaded!”

Tickets to the new dates go on sale to the general public on Thursday, March 31, at 10 a.m. PT at Ticketmaster.com/Aerosmith. Members of the band’s Aero Force One fan club can purchase pre-sale tickets starting Thursday, March 24, at 9 a.m. PT.

Citi card holders will be able to access pre-sale tickets beginning Friday, Mach 25, at 10 a.m. PT; visit CitiEntertainment.com for more details.  Pre-sale opportunites for members of the MGM Rewards loyalty program, as well as Live Nation and Ticketmaster customers, also will be available.

The last shows Aerosmith played before the pandemic began were in February 2020 as part of their residency at the Park MGM resort.

The band’s only other confirmed concert on their 2022 schedule is a previously announced September 8 show at Boston’s Fenway Park with Extreme celebrating Aerosmith’s 50th anniversary.