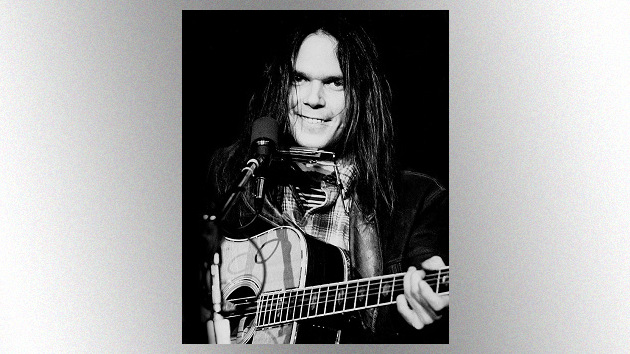 Fifty years ago today, March 18, 1972, Neil Young scored his only #1 hit on the Billboard Hot 100 when “Heart of Gold” ascended to the top spot on the chart.

“Heart of Gold” was the lead single from Young’s fourth studio album, Harvest, which earlier that month became Neil’s first — and only — solo effort to reach #1 on the Billboard 200.

Young recorded the song in Nashville in February 1971 during the same sessions that yielded Harvest‘s second single, “Old Man,” which went on to peak at #31 on the Hot 100.

“Heart of Gold” featured backing vocals by James Taylor and Linda Ronstadt, who, along with Young, were in Nashville at the time to appear on an episode of Johnny Cash‘s variety show. Besides his lead vocals, Neil played harmonica and guitar on the track. The other contributing musicians were three members of Young’s backing group The Stray Gators — Ben Keith on pedal steel guitar, Tim Drummond on bass and Kenny Buttrey on drums — as well as renowned session guitarist Teddy Irwin.

Taylor and Ronstadt also lent their vocal talents to “Old Man,” while James played banjo guitar on the track as well.

Reflecting on the popularity of “Heart of Gold,” Neil wrote in the liner notes of his 1977 Decades compilation, “This song put me in the middle of the road. Traveling there soon became a bore so I headed for the ditch. A rougher ride but I saw more interesting people there.”

Harvest went on to become the best-selling album in the U.S. for 1972, and is Young’s his best-selling solo album ever. It has been certified four-times platinum for sales of over four million copies in the States.