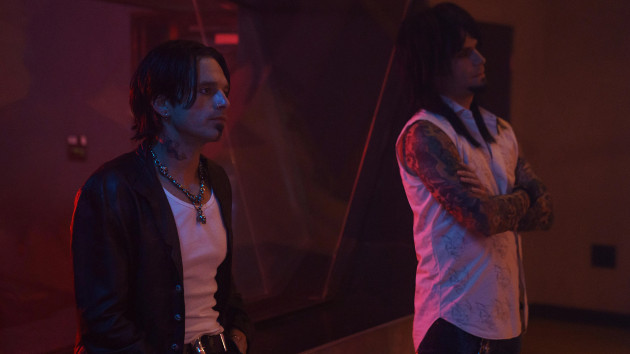 At least one moment in Pam & Tommy didn’t actually happen.

In the most recent episode of the Hulu limited series, which tells the story of Pamela Anderson and Tommy Lee‘s infamous sex tape, the Mötley Crüe drummer, played by Sebastian Stan, gets into a tiff with Third Eye Blind frontman Stephan Jenkins, portrayed by Jeffrey Conway.

The scene, which takes place in 1996, finds Lee angry that his band was booked in a smaller studio than where they usually record, which is now occupied by the up-and-coming “Semi-Charmed Life” rockers. When Lee confronts Jenkins and company, he learns both bands are signed to the same record label, Elektra.

“They booked these a**clowns in the big room over us?” Lee exclaims in disbelief.

However, as the real life Jenkins tells Variety, the scene is all fiction.

“Mötley Crüe and I’ve never been in the same studio,” Jenkins says. “I recorded my whole first album in Northern California. So we were across the state from each other at the very least.”

Jenkins adds that he hasn’t watch the Pam & Tommy scene, explaining, “I feel strange watching myself being portrayed.”

“Just the idea is making me kind of smile,” he says. “I hope whoever played me on TV was pretty.”

As for why the Third Eye Blind scene was included if it didn’t happen, Pam & Tommy executive producer Rob Siegel says that he felt the “Jumper” outfit was the “perfect band” to represent where Mötley Crüe was in the music industry at the time.

“I did a little quick Google search…Who else was on Elektra? Third Eye Blind,” Siegel says. “The timing was perfect…So the scene is fictional, but I like to think it absolutely could have happened!”