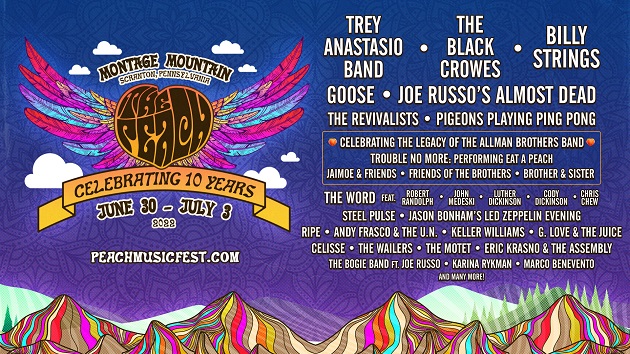 The lineup for the 2022 edition of the Allman Brothers Band-founded Peach Music Festival has been unveiled, and The Black Crowes and Phish singer/guitarist Trey Anastasio‘s solo band are among the acts that have been confirmed as headliners.

Jaimoe will be playing with a collective dubbed Jaimoe and Friends, while The Wailers will perform the late Bob Marley‘s classic hits compilation Legend in its entirety. In addition, a group called Trouble No More will celebrate the 50th anniversary of The Allman Brothers’ 1972 album Eat a Peach. Trouble No More’s lead singer is Lamar Williams Jr., whose late father played bass with the Allmans from 1972 to 1976.

With the festival scheduled just before July 4, the four-day bash will conclude with a spectacular fireworks display on Sunday, July 3.

To purchase tickets and packages, and to check out the latest information about the fest, visit ThePeachMusicFestival.com.