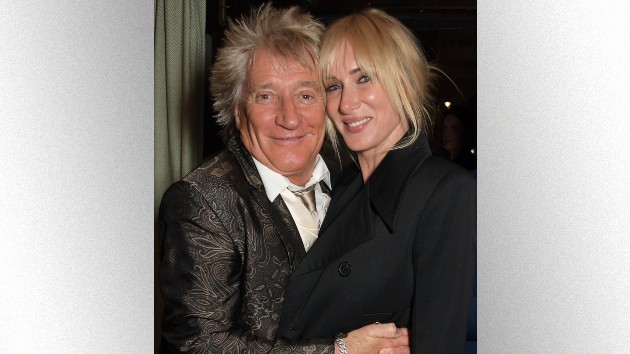 Rod Stewart spent the weekend celebrating two things: the engagement of his daughter, Kimberly Stewart, and the 70th anniversary of Queen Elizabeth II‘s ascension to the throne.

Kimberly, Rod’s daughter with his first wife, Alana Stewart, got engaged over the weekend to producer Jesse Shapira, People confirms.  Kimberly has a 10-year-old daughter, Delilah, with her ex, Benicio del Toro.

On Sunday, Alana posted photos of herself and Rod having a celebratory dinner in LA with Kimberly and Jesse, as well as Kimberly’s brother, Sean, and Renee Stewart, Rod’s daughter with his second wife, Rachel Hunter. Rod has eight children by five different women, and maintains good relationships with all his kids, and most of their mothers.

Meanwhile, Sunday marked the 70th anniversary of Queen Elizabeth II‘s ascension to the throne, and the official start of her Platinum Jubilee year.  Rod posted a few photos of himself greeting and chatting with Her Majesty over the years, and wrote, “She’s been a wonderful example of how to conduct yourself with integrity and grace for 70 years now (just like me!) and we should all look forward to acknowledging her magnificent service.”

“I remember quite vividly when I was invited to sing a few songs for Her Majesty at St James’s Palace for a charity event. It was without doubt the most nervous I’ve ever been,” Rod confessed. “Her Majesty looked somewhat terrified as well, I think she thought I was going to play a loud version of ‘Hot Legs’ or something(!) but I didn’t, choosing instead ‘What a Wonderful World’ from my American Song Book collection.”

Rod concluded, “Her Majesty smiled and looked extremely relieved. What a Lady…so cool!”