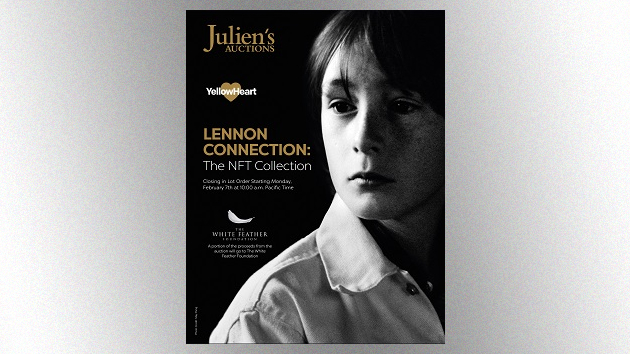 This Monday, February 7, Julian Lennon will auction off six one-of-a-kind NFTs focusing on three prized Beatles-related items from his memorabilia collection and three guitars that his late dad, John Lennon, gave him as gifts.

The “Lennon Connection: The NFT Collection” sale is being presented by the NFT marketplace YellowHeart in partnership with Julien’s Auction, and will be held live in Beverly Hills and online at JuliensLive.com and YH.io.

The Fab Four memorabilia depicted in the NFTs are Paul McCartney‘s handwritten studio notes for the recording of “Hey Jude,” a black cape Julian’s father wore in the film Help!, and an Afghan coat John wore in the Magical Mystery Tour special.

Julian tells ABC Audio that to make the NFTs unique, he came up with the idea to animate the images of the items and record narration explaining why each piece is special to him.

He says the “Hey Jude” studio notes are meaningful because McCartney wrote the song to cheer him up when he was a boy at the time that his father and mother were separating.

Julian explains that the Help! cape is significant because he remembers his mother telling him about how she visited his dad during filming in Austria, where they both learned how to ski.

He says the Afghan coat has particular meaning to him because he spent lots of time with John while Magical Mystery Tour was being made. In addition, Julian notes, “I just loved [the] coat, regardless. I thought it was a beautiful, beautiful coat.”

Julian says an important aspect of the auction is that some proceeds will go to his White Feather Foundation, which will help fund the charity’s global work in such areas as clean water, health, education, conservation of life, and protection of indigenous cultures.